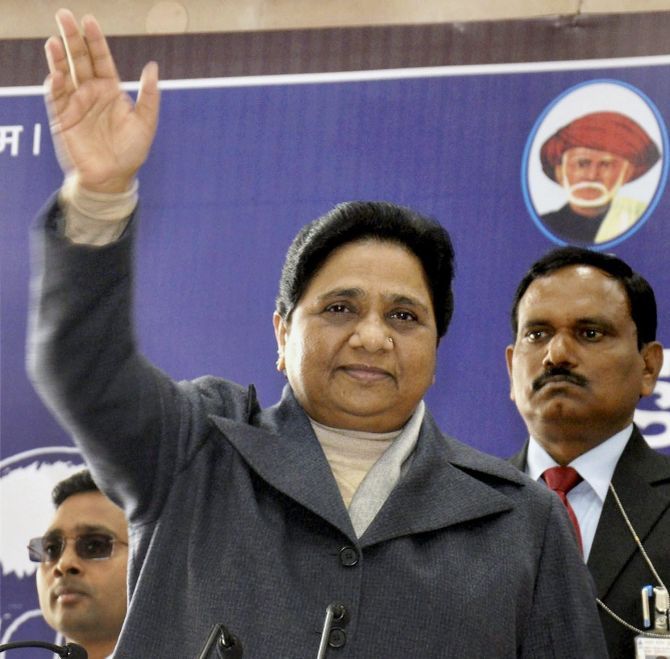 The Bahujan Samaj Party on Sunday announced candidates for 101 assembly seats in Uttar Pradesh, completing the exercise for all but two of the 403 constituencies, fielding 12 more Muslim candidates this time to ensure Dalit-Muslim consolidation in a bid to wrest power from Samajwadi Party.

Candidates for the two remaining seats in Sonebhadra district will be finalised after a decision is taken as to whether they are general or reserved for Scheduled Tribes, the BSP said in a release in Lucknow on Sunday.

Since Muslims account for nearly 20 per cent of the voters in Uttar Pradesh, Mayawati decided to field more candidates belonging to that community, playing her Dalit-Muslim consolidation card to come back to power.

Muslims, who had by and large supported the SP in the 2012 elections, are in a quandary in view of the squabbling in the Yadav family and factional fight between Chief Minister Akhilesh Yadav and his father, Mulayam Singh Yadav.

With a weak Samajwadi Party, Muslims will look for alternatives and Mayawati wants to be at the right place at the right time, say analysts. If she manages to direct the entire Muslim vote her way, she could pose a tough challenge to the Bharatiya Janata Party and SP, they believe.

Before releasing the fourth list of candidates, Mayawati presided over a meeting of party office-bearers, leaders, legislators, MPs and party candidates where she told them to fan out in their respective constituencies and work for the BSP’s victory.

She also asked her party leaders to expose Samajwadi Party government on lawlessness and the Centre on demonetisation.

She took potshots at the Yadav family spat saying voters should not spoil their ballots by backing Samajwadi Party as doing this would indirectly benefit the BJP in the polls.

An analysis of the complete list released by the BSP brings out an interesting fact that it is not Dalits but the upper caste which has got the second biggest share after Muslims.

Uttar Pradesh goes to polls in seven phases between February 11 and March 8.

In the first list of 100 candidates released by party supremo Mayawati on Thursday for the communally sensitive western Uttar Pradesh, 36 tickets went to Muslims and 27 to the upper castes including 17 to Brahmins and eight to the Thakurs.

Twenty seats were given to OBCs, which have significant strength in the region which goes to polls in the first two phases on February 11 and 15.

Mayawati replaced 10 sitting MLAs in the region, including four who have defected to the BJP. But, she retained nine candidates who lost in 2012 by narrow margin.

After giving maximum tickets to Muslims in the first list, Mayawati gave 27 seats to Dalits in the second list of 100 more candidates released on Friday.

In the second list, covering major portions of Rohilkhand and central UP, the number of Muslim nominees came down to 23 compared to 36 in the first list.

She also appeared to strike a balance with the upper castes giving Brahmins 14 seats and Thakurs 8. OBCs got 24 seats.

Areas covered in the second list include some SP strongholds like Kannauj, Etawah and Mainpuri, besides Lucknow and Kanpur.

Muslims once again got the lion’s share in the third list another 100 aspirants released by the BSP on Saturday when 27 candidates belonging to that community were given tickets -- seven more than what the party had fielded in 2012.

The BSP has put up a Muslim candidate in Ayodhya seat.

In a bid to strengthen her hold over Muslim voters, Mayawati has fielded Bazmi Siddiqui from the prestigious seat that has been projected by BJP as the symbol of Hindu resurgence.

The constituency, currently represented by SP, has 18 per cent Muslim voters and 20 per cent Dalits.

BSP leaders claim the Dalit-Muslim combine is expected to pay rich dividends to the party ‘considering the fact that SP is in doldrums’.

IMAGE: BSP supremo Mayawati waves a party meeting in the view of UP assembly polls at the party office in Lucknow on Sunday. Photograph: PTI Photo