IMAGE: People wait with their identity cards to cast their votes for the Madhya Pradesh assembly elections in Jabalpur. Photograph: PTI Photo

The voter turnout in Madhya Pradesh went up whereas it saw a small dip in Mizoram on Wednesday, the Election Commission said.

In Madhya Pradesh, a record 75 per cent voters turned up at polling stations to exercise their franchise.

"The voter turnout (in Mizoram) has been 80 per cent but it may rise as the process to ascertain the final figure is still going on," Ashish Kundra, Chief Electoral Officer of Mizoram, said late Wednesday. 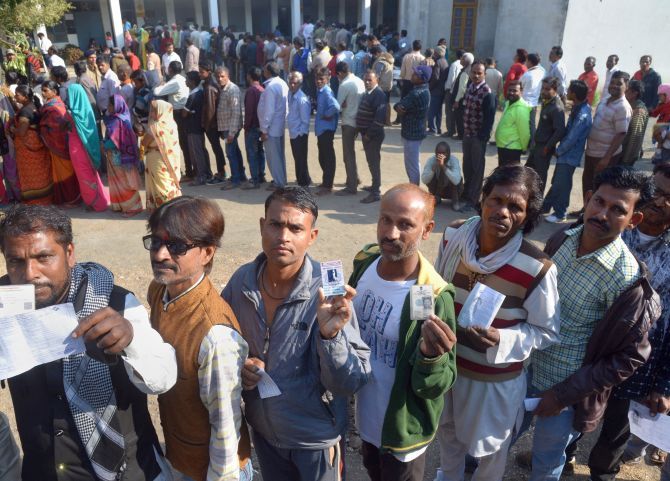 Voters turned out in large numbers in three constituencies in Naxal-affected Balaghat district with the tally being 75.05 per cent in Baihar, 79.07 per cent in Lanjhi and 80.05 per cent in Paraswada, officials said.

Polling in the state was marred by complaints of faulty EVMs and voter verifiable paper audit trail machines. 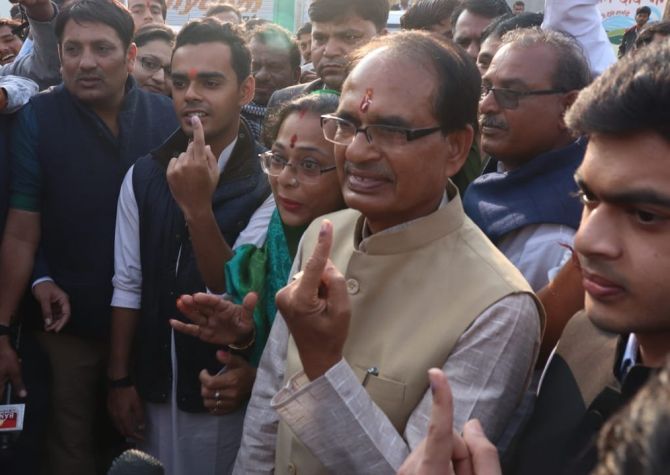 About 2.5 per cent (polling) machines were replaced, Rao said, adding this percentage was around two per cent in other states where elections were held recently.

Chief Minister Shivraj Singh Chouhan, who is seeking a fourth term, and his wife Sadhana Singh cast their votes at his native village Jait, which is part of his Budhni assembly constituency.

Polling was held between 8 am and 5 pm in 227 seats, while in naxal affected areas of Lanji, Paraswada and Baihar the voting time was between 7 am and 3 pm. 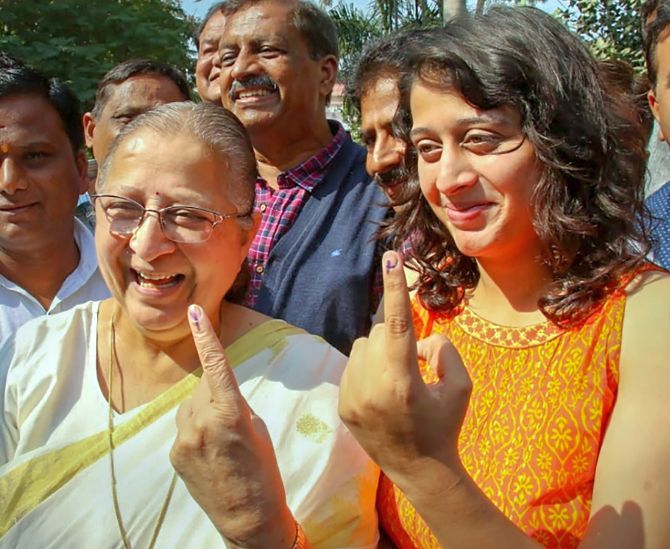 IMAGE: Lok Sabha Speaker Sumitra Mahajan along with her grand-daughter shows her finger marked with indelible ink after casting her vote in Indore. Photograph: PTI Photo

Those who were in the queue at the polling booths till 5 pm were allowed to vote, Rao said, adding polling there was underway at 2,200 polling stations.

"There was no demand for re-polling. Poll officials received 386 complaints and all of them were resolved," he added.

Three employees died due to "health reasons" while performing poll duty in Dhar, Indore and Guna districts, he said.

At Gadhpura village in Bhind district, a person was injured in violence but it was not poll-related, he said. The incident happened "far from the booth" and was related to enmity between two groups, he added. 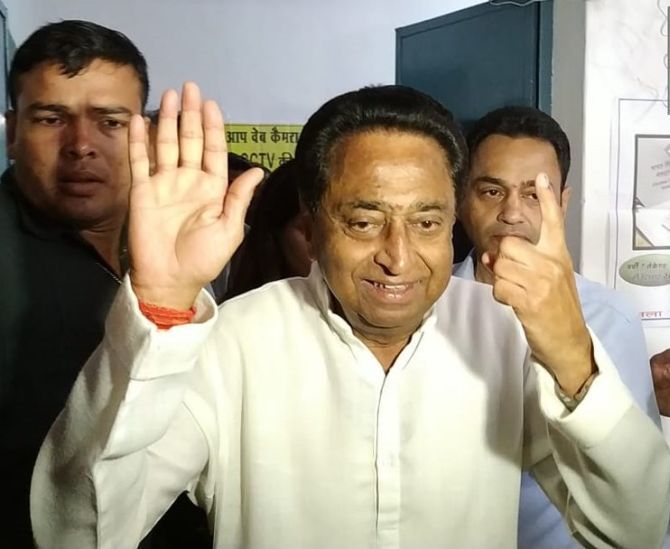 On reports that some EVMs were found in a hotel, Rao said, "We got information that a sector officer in Shujalpur was staying in a hotel along with ballot machines. On getting information, a team of officers reached the hotel and seized the machine. The officer concerned was removed (from poll duty) and the polling team was sent along with a new sector officer."

Leaders of Congress, which is in a straight fight with BJP to win the crucial election in the central Indian state, claimed that EVMs at many places malfunctioned.

"There were several complaints that EVMs at many places malfunctioned. We had requested the Election Commission that voting time in these polling booths should be extended to compensate for the delay," Congress leader Jyotiraditya Scindia said. The Commission should compensate for time wasted in replacing EVMs by extending polling time, the Guna MP said. 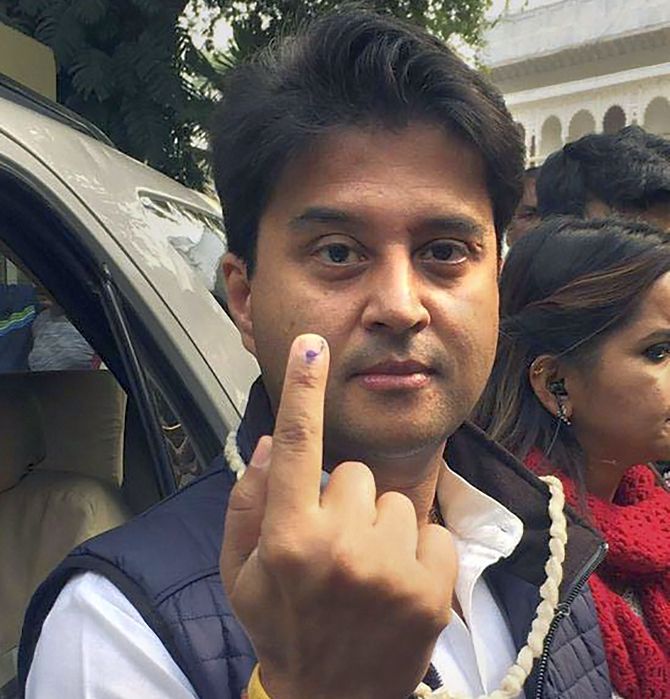 State Congress president Kamal Nath said there were reports from across the state that EVMs did not work at many places. "This affected polling. Long queues were witnessed..." he said.

Chief Election Commissioner O P Rawat said in Delhi there are provisions for the extension of time and local officers (in Madhya Pradesh) were empowered to take a call on the issue.

Nath cast his vote in Chhindwara district while Scindia, the party's state campaign committee chief, exercised his franchise in Gwalior.

As many as 2,899 candidates, including 1,094 independents, are in the fray for 230 seats, but the main contest is between the Congress and the Bharatiya Janata Party.. The state has 5.04 crore eligible voters. Altogether 3,00,782 government employees were on poll duty and 65,341 polling stations were set up for polling, which was peaceful, Rao said. 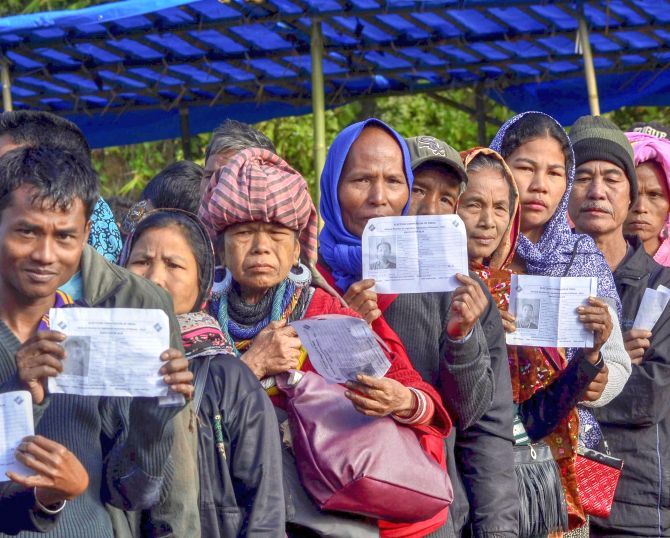 IMAGE: Voters show their identity card as they stand in a queue at a polling station during the Mizoram assembly elections at Kanhmun. Photograph: PTI Photo

Polling was held in all 40 assembly seats in the northeast state. 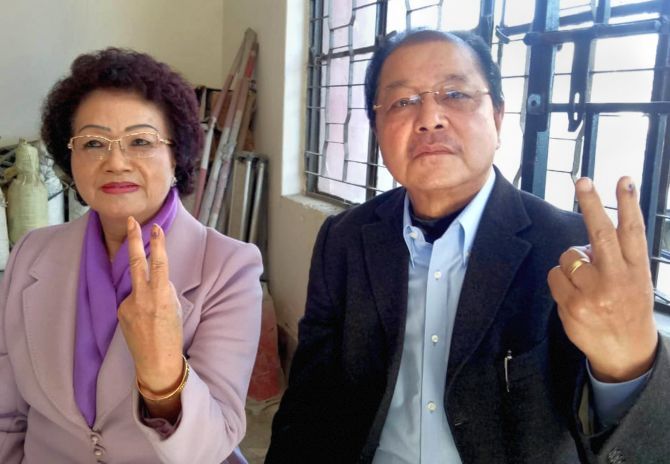 Of the 1,179 polling booths, 47 were classified 'critical' and as many as 'vulnerable' by the Election Commission.

Chief Electoral Officer Ashish Kundra earlier told reporters that the highest turnout of 81 per cent was reported at Serchhip seat, where Chief Minister Lal Thanhawla is one of the contestants. IMAGE: A Riang tribal woman brings her child at a polling station to cast her vote at Kanhmun, Mizoram. Photograph: PTI Photo

The polling in Kanhmun ended at 3 pm, while for the rest of the state the time was 4 pm.

"I congratulate the Mizo people for free, fair and peaceful elections. My special gratitude to the Mizo civil society, particularly Young Mizo Association. They helped the election authority in every possible manner... ," said Kundra, who had replaced S B Shahshank less than a fortnight before the polls.

Shahshank had been removed by the Election Commission following large-scale protests by civil societies after he complained against Mizoram's Principal Secretary (home) Lalninmawia Chuaungo for playing an active role in the revision of electoral roll of Bru refugees lodged in the Tripura camps since 1997. In Mizoram, around 55 per cent of Bru voters in six relief camps in Tripura came to Aizawl and exercised their franchise at the 15 special polling booths created for them after public outrage over their place of voting.

There was apprehension that the voter turnout of Bru refugees would be very less as some of their leaders were initially reluctant to come to Mizoram and demanded the earlier system of exercising their franchise at the relief camps itself. 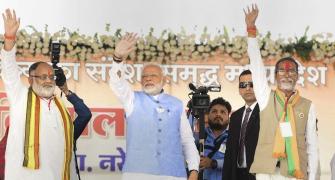 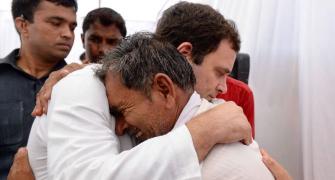 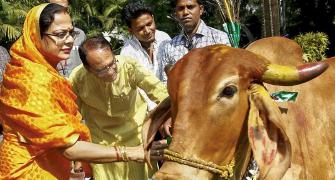 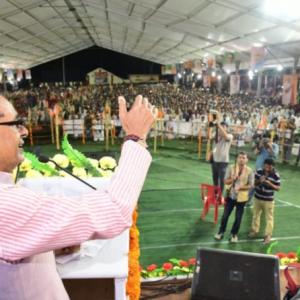 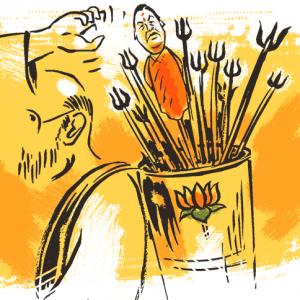