Five people were arrested on Friday in connection with the assault on Central Reserve Police Force men during bypoll to the Srinagar parliamentary seat on April 9, while two more disturbing videos went viral, sparking a fresh row in the restive Kashmir valley. After receiving a complaint from the CRPF, five persons were arrested, and a hunt was on for others seen in the video shot in Budgam district, police said. Budgam accounted for the death of seven of the eight protesters during the poll-day violence.

The video surfaced a day after the polling in which some CRPF personnel were seen walking down a street while being heckled, kicked and punched by youths, setting off a nationwide outrage. There was no retaliation by the security personnel, who quietly walked to their camp as they were under instructions to not open fire, sources in the paramilitary said.

The CRPF had strongly protested with the Jammu and Kashmir police as its personnel and polling staff had abandoned the polling station early, officials said.

Jammu and Kashmir Police chief S P Vaid lauded the restraint shown by the CRPF jawans and said, "Any armed force in the world would have retaliated with force".

"We have registered an FIR in police station Chadoora against the ruffians who heckled the CRPF personnel. They will be dealt with as per law," Vaid said.

The Director General of Police said an FIR has also been lodged after a video surfaced in which an Indo Tibetan Border Police personnel was seen shooting right in the head of a stone-pelting protester outside a polling station in same area.

"A case has been registered in connection with that incident also. It is a matter of investigation and action will be taken against whoever is found guilty," the DGP added.

Officials of the central paramilitary force claimed the local police had abandoned the polling station, leaving the ITBP jawans without any non-lethal riot-control weapon.

The third video showed a youth in Beerwah being tied to an army jeep, ostensibly to be used as a human shield against stone-pelting by rampaging protesters.

The video triggered an outrage, with former Chief Minister Omar Abdullah terming it as "shocking".

The video was reportedly shot in Beerwah, Omar's assembly constituency. "This young man was TIED to the front of an army jeep to make sure no stones were thrown at the jeep? This is just so shocking!" Omar wrote on Twitter.

The National Conference leader said while he understands the outrage generated across the country by the video in which CRPF personnel were seen being assaulted, he was enraged because the video of the youth tied to the jeep was not generating the same anger.

"I understand the outrage the CRPF video generated. I'm also outraged that the video of the youth on the jeep won't generate the same anger," he said.

Amid the uproar over the videos, Chief Minister Mehbooba Mufti quickly got into action and sought a report from the state police on the "disturbing" videos of "unacceptable" incidents which have emerged from the Budgam district from the day of polling.

The chief minister expressed concern over the videos being circulated on social media and has directed the police to submit a detailed report about the incidents so that necessary action could be taken, official sources said.

Army was quick in ordering an inquiry. "In reference to the video showing a young man tied to an army jeep, the contents of the video are being verified and investigated," a defence spokesman said. 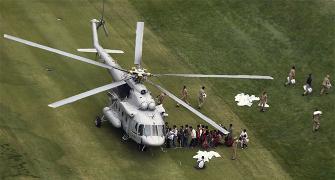 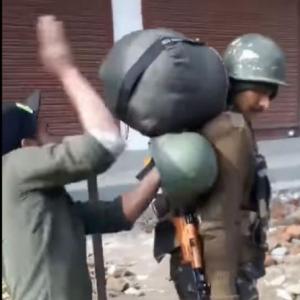