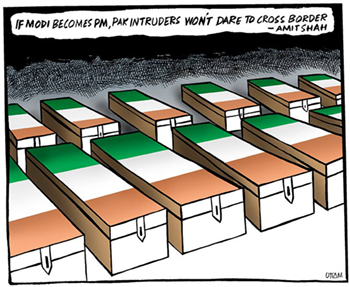 Uttam Ghosh offers his take on the unfortunate tragedy where our brave soldiers die every week to prevent more lethal attacks on the nation. When Narendra Modi became prime minister the terrorists would never dare to cross the LoC, Amit Shah, then a minister in the Gujarat government, promised us, implying that Modi's tough guy image would scare the terror masterminds lurking across the border to keep their murderous hordes away from the Kashmir valley.

With the almost weekly terror attacks on the Indian Army in the valley, claiming the most precious lives of our soldiers, we are reminded of Shah's boast and wonder what went wrong.

Why are the terrorists attacking our soldiers with such reckless impunity?

Addressing a rally in his native Goa, the minister had declared, 'There is no doubt that the army is gallant. But for the first time, the country's political leadership took a strong policy decision. And after that too, we have given an appropriate response to other cowardly attacks.'

'It was such a powerful response that some days back, finally they called us that "Please stop this, we are pleading with you,"' Parrikar revealed. 'We said that we have no problem stopping it, but you stop it too. As a result, there is no firing on the border.'

Tuesday's attack on an army convoy in Shopian -- where three brave sons of India made the ultimate sacrifice for the motherland -- comes just days after seven courageous soldiers lost their lives fighting the terrorists.

Uttam Ghosh offers his take on the unfortunate tragedy where our soldiers die every week to prevent more lethal attacks on the nation.

When, Prime Minister Modi, will the coffins of our heroes stop coming home?