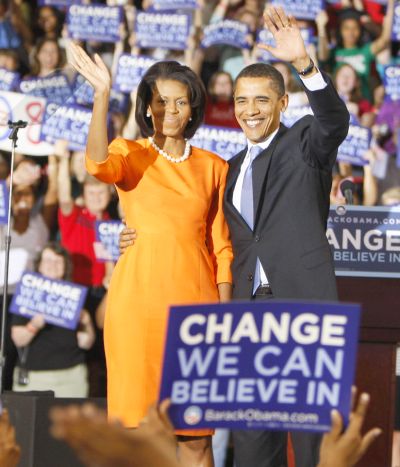 Bolstering his claim further for the Democratic nomination for the November presidential polls, frontrunner Barack Obama has clinched the key North Carolina primary that had 115 delegates at stake.

Also Read: Another Clinton comes to the fore

Obama emphatic win means more trouble for rival Hillary Clinton, who is trailing him by a considerable margin in the elected delegates count. The New York Senator was, however, leading in Indiana primary, which has 72 delegates.

Of the total number in North Carolina, Obama was expected to walk away with at least 55 per cent of pledged delegates, the rest going to Clinton in a proportional distribution system.

Also Read: What happened in Pennsylvania

Some analysts maintained that overall Senator Obama had put together a bi-racial coalition in North Carolina.

When polling began Tuesday, Obama was maintaining an eight-point lead in North Carolina, substantially down from the nearly 20-point advantage he posted a few weeks ago.

However, Clinton advisers had admitted that a win in North Carolina would have been the 'dream' of the century.

With Obama's critical victory, the argument is already being made that even if Clinton stays in the race -- and she has said that there was absolutely no question of quitting -- there was no way she would catch up with the Illinois Senator.

However, in what may be a disturbing development for the Democratic party leadership, exit polls showed that while 70 per cent of Obama's supporters would back Clinton if she was to be the nominee, only 47 per cent of her supporters said they would support the African-American if he was nominated.

Before the two primaries, Obama was leading the delegate count with 1724.5 delegates with Clinton at 1593.5.

In the super-delegate category, Clinton held a slender lead -- 259 to 235. It requires 2025 delegates to win the Democratic Party nomination.

With the verdict looking to be divided, the tussle would all likely stretch over a few more weeks in primaries of West Virginia, Nebraska, Kentucky and Oregon.

The hotly-contested duel for the party nomination for November presidential polls has thus far crossed as many as 47 primaries and caucuses, only to tighten the race between the 60-year-old Clinton and the 47-year old Obama each time.