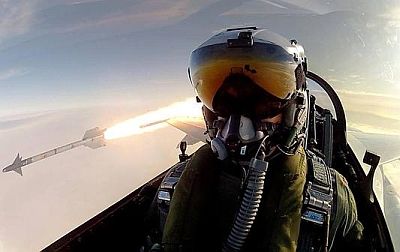 A selfie, bragging about the command and control capabilities of the Islamic State, posted on social media by a terrorist helped the US forces track and destroy its headquarters in Syria in less than 24 hours.

"These guys that are working down at Hurlburt (Florida), they were combing through social media. And they see some moron standing at this command and control capability for Daesh, ISIL," said Hawk Carlisle, commander of Air Combat Command.

Twenty-two hours after seeing the post, US warplanes went in for the kill and destroyed the building, reported CNN.

A JDAM is a kit attached to a conventional bomb that converts it into a "smart" weapon, according to the US Navy.

Carlisle did not give details of the type of JDAM bomb or aircraft used.

He was also more careful than the selfie simpleton and didn't specify the location of the flattened HQ.

"Incredible work when you think about it," Carlisle said of the operation.

"And it was these incredible airmen out there doing those kind of things," he was quoted as saying in the CNN report.

Social media has been a central focus for ISIS to recruit, share their experiences and show off their triumphs.

However, US intel, specifically airmen, have been avidly searching across social media to track down ISIS whereabouts to actively respond.

The terror group has published 1,700 photos, videos and other posts, reaching up to 200,000 users on Twitter and other social media sites, experts told Congress, according to Air Force Times reported.

Source: PTI© Copyright 2021 PTI. All rights reserved. Republication or redistribution of PTI content, including by framing or similar means, is expressly prohibited without the prior written consent.
Related News: Hawk Carlisle, CNN, US Navy, ISIS, ISIL
Print this article