US should slap sanctions on ISI officials: Riedel

Stating that there are growing evidences that some elements of the Pakistan's inter Services Intelligence helped Osama bin Laden in hiding safely inside Pakistan, a former top Central Intelligence Agency official has asked the United States to slap sanctions against spy agency's those officials who are aiding and abetting terrorists.

"We should tell the Pakistani army leadership that if we learn one of their officers is involved in harboring terrorists, planning terror operations, or tipping terrorist bomb factories off to drone raids, we will make it personal," said Bruce Riedel, a former CIA official and now a senior fellow in the Saban Center at the Brookings Institute.

"Don't sanction the country or the ISI; sanction individuals. Hold them accountable. That officer will go on our terrorist most-wanted list, and we will seize his property if we can, arrest him if he travels, expel his kids from school here or in England, and -- if he is truly dangerous enough -- take direct action," he wrote in an article published by Tablet.

"We should not do this alone. We should get allies, especially the British, to help, since Pakistanis love to visit London and send their kids to school in the United Kingdom," said Riedel, who is the author of the book Embrace: Pakistan, America and the Future of the Global Jihad.

He argued that the US will need a base to stage operations into Pakistan for the foreseeable future.

"We can hope Al Qaeda will implode soon, but we cannot count on that. The Arabian Sea is too far away," he noted.

"So, we need a US military presence in Afghanistan so we can continue to send drones and commandos over the Pakistani border. We don't need 100,000 troops in Afghanistan, but we do need Afghan permission to operate in that country for the long term. That is the other hard lesson of Abbottabad," he said.

Riedel said that there are growing evidences that some part of the ISI helped Osama bin Laden in hiding safely for more than five years in Abbottabad.

"Now the evidence is growing that at least some part of the ISI and the Pakistani army was, in fact, actively complicit in hiding Bin Laden for the past five years," he said

Referring to a New York Times news report, Riedel said that bin Laden was in regular contact with the Harakat ul Mujahedin terror group, which the ISI created in the 1980s to fight India. 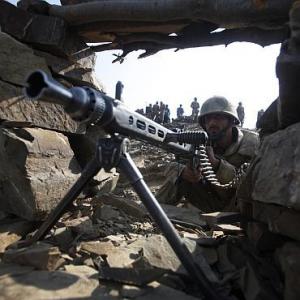