US seeks roadmap for normalcy in Kashmir

The United States on Thursday sought from India a "roadmap" to political and economic normalcy in Kashmir and immediate release of all political detainees as it asked Pakistan to take "sustained and irreversible" steps against terrorists in its territory. 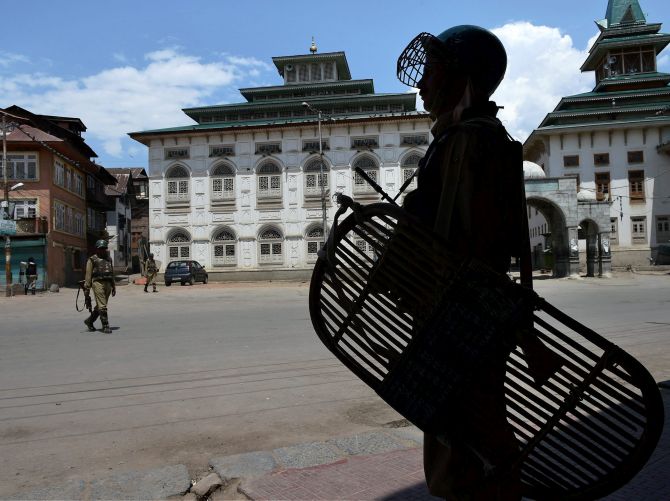 Most of the top level and second rung separatist politicians of Jammu and Kashmir have been taken into preventive custody while mainstream leaders, including two former chief ministers -- Omar Abdullah and Mehbooba Mufti, have been either detained or placed under house arrest in view of the Centre's decision to revoke special status to Jammu and Kashmir and splitting the state into two Union Territories.

"We continue to press for the release of detainees for the full restoration of everyday services, but most importantly, for roadmap to the restoration of political and economic normalcy," said Acting Assistant Secretary of State for South and Central Asia Alice G Wells.

The US remains "deeply concerned" about the situation in the Valley where daily life of nearly eight million residents has been severely impacted since the decision to revoke Jammu and Kashmir's special status and to "detain without charge" political leaders and restrict communications, Wells said in an interaction with reporters at Foggy Bottom headquarters of the State Department.

"We've seen progress for example four million postpaid mobile phone users have had service restored, but SMS and internet is restricted," she said.

Internet services across all platforms continued to be snapped in the Valley since the night of August 4, hours before the Centre announced its decision to abrogate Article 370 provisions that gave special status to Jammu and Kashmir and split the state into two UTs, officials in Srinagar said.

Noting that journalists have extensively covered developments in Kashmir, Wells said the role of some of the international reporters have been particularly important, but journalists continue to face challenges in access while reporting due to the security restrictions.

"In this vein, we welcome (Pakistan) Prime Minister (Imran) Khan's unambiguous statement in September that anyone who crosses from Pakistan to carry out violence in Kashmir are enemies of both Pakistan and the Kashmiri people," she said.

"The constructive dialogue that we'd like to see between India and Pakistan must be based on Pakistan taking sustained and irreversible steps against militants and terrorists in its territory," Wells said.

United States President Donald Trump and Secretary of State Mike Pompeo have met and spoken with their Indian and Pakistani counterparts multiple times and all sides have the responsibility to create the conditions in Kashmir for dialogue including avoiding heated and unhelpful rhetoric, she said.