Trump campaign says election far from over; Biden moves forward with his plans

As United States President-elect Joe Biden is gearing up for administering the country, the defiant Trump campaign has asserted that the 2020 US presidential election is far from over and indicated that it will explore all possible options to obtain "an accurate and honest vote count." Outgoing US President Donald Trump has declined to concede the closely-fought November 3 presidential race to Democrat Biden and is mounting legal fights in several key battleground states, but there has been no evidence of voter irregularities or widespread fraud in the election -- billed as one of the most divisive and bitter in recent American history.

The president's refusal to accept the results means the election disputes could drag for weeks as states certify their tallies or push to mid-December, when the 538-member Electoral College is set to vote.

US President Trump has made repeated and baseless claims that the Democratic Party has tried to steal the election.

According to several US media projections, Biden has won at least 290 electoral votes, 20 more than the required 270 out of the 538 Electoral College votes. Trump has received 214 electoral votes.

Since media projected on Saturday that Biden had won the critical state of Pennsylvania, accumulating enough votes to claim the White House, the US president-elect has forged ahead with his plans to take reins of the power.

On Monday, Biden formed a task force that will guide him on dealing with the coronavirus pandemic that has claimed over 236,000 lives in the country.

Biden cannot technically move to form a government using current government employees until his January inauguration, unless permission from Trump is granted to do so. Trump has not conceded to Biden or publicly accepted his loss.

"This election is not over, far from it. We have only begun the process of obtaining an accurate, honest vote count. We are fighting for the rights of all Americans who want to have faith and confidence not only in this election but in the many elections to come," McEnany told reporters at a news conference with the Republican National Committee Chairwoman Ronna McDaniel.

Speaking in her capacity as a Trump campaign Advisor, McEnany attacked the Democratic Party, saying there is only one party in America that opposes voter ID, verifying signatures, citizenship, residency and eligibility.

"There is only one party in America trying to keep observers out of the count room and that party my friends is the Democratic Party. You don't take these positions because you want an honest election," she said.

McEnany said that the position of the Trump Campaign is clear. "We want to protect the franchise of the American people. We want an honest, accurate, lawful count. We want maximum sunlight; we want maximum transparency.

In Pennsylvania, she alleged, poll watchers who were legally permitted to be there and observe the vote count were blocked from observing the count.

"Even one instance of voter fraud should be too many for all of us," she said.

"We will not give up on this process until every last issue has been uncovered," McDaniel said.

Senate Majority Leader Mitch McConnell also backed Trump on Monday, saying the US president is "100 per cent within his rights" to question the election outcome.

The top Republican leader's remarks were his first public comments since Biden was declared the winner of the presidential election.

Most Republicans are refusing to congratulate Biden or declining to push Trump to accept the outcome.

"Our institutions are actually built for this," McConnell said as he opened the Senate. We have the system in place to consider concerns and President Trump is 100 per cent within his rights to look into allegations of irregularities and weigh his legal options."

McConnell said the process will play out and "reach its conclusion".

Meanwhile, US Attorney General William Barr has told federal prosecutors that they should examine allegations of voting rregularities before states move to certify results in the coming weeks.

But Barr's unusual move has led to the resignation of the Justice Department's top election crimes prosecutor.

Richard Pilger, director of the elections crimes branch in the Justice Department's Public Integrity Section, told colleagues in an email that the attorney general was issuing "an important new policy abrogating the 40-year-old Non-Interference Policy for ballot fraud investigations in the period prior to elections becoming certified and uncontested."

Pilger also forwarded the memo to colleagues in his resignation letter, CNN reported.

Barr's memo has reportedly told prosecutors they could take investigative steps such as interviewing witnesses during a period that they would normally need permission from the elections crimes section.

It is not clear what practical effect the policy would have in an election in which US President Trump trails President-elect Joe Biden by tens of thousands of votes in several key states, the report said.

Interestingly, Barr has previously been supportive of Trump's unfounded claims about voter fraud, and his latest move comes during an incredibly tense time in American politics could inflame an already fraught transition. 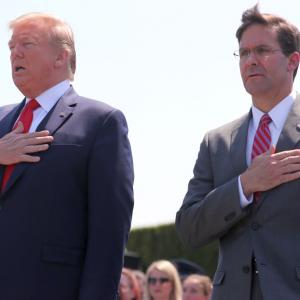