US never listens to us, complains Pakistan

Source: PTI
August 03, 2012 20:12 IST
At a time when both countries are trying to mend their ties, Pakistan's top envoy in London said some factions in the United States still prefer to work with "just one man" rather than a democratic government, and accused Washington of "talking in miles" when it comes to democracy but of "moving in inches".

The remarks were made by Pakistan High Commissioner to the UK Wajid Shamsul Hasan who was "scathing about what he sees as the US's weak commitment towards democracy in Pakistan and Afghanistan". "They talk in miles in support of democracy, but they move in inches. They say, 'We are fully for democracy, we want democracy, we support the Arab Spring, we are opposed to military interference in Egypt'.

"All of these things are very good. They are music to my ears. But when it comes to real politics they are different. [US Secretary of State] Hillary Clinton has really supported democracy. But she is one person. There are so many pillars of power in the United States, and they act differently," Hasan said in an interview to London-based Bureau of Investigative Journalism.

He also "implies there are those in the US government who would still prefer to be dealing with a dictator," the report said.

"The United States if you look at Pakistan's 65 year history has always preferred to deal with one man rather than with institutions. They would never like a matter to go to the parliament, to be debated there, for issues to be accountable to the parliament and the people, they don't want that, they want one man," he was quoted as saying.

Regretting that offers to mediate with the Taliban in Afghanistan had been rebuffed by the US, Hasan insisted that his country can still play a key role in negotiating peace in the war-torn country.

The Pakistan envoy said his country has had "the best relationship" with the Taliban, which placed it in a good position to negotiate with the group.

"When we have been telling them (the US) that you must have a dialogue with the Taliban, good or bad, they never listen to us. Now they have started back-door diplomacy and all these backtracks through the Saudis and others. But again they're forgetting one thing."

He added, "Pakistan has been one of the major players in the region, ever since the Soviets occupied Afghanistan. We have had the best relationship with those Afghans, the Taliban or whatever in the past. Couldn't we be a better option for them to deal with those people? No - they never bothered."

Questioning US achievements in the last decade in Afghanistan, Hasan said, "How long have NATO troops been there in Afghanistan? Nine, ten years? And they've spent trillions of dollars there, but have they succeeded to clear one particular area of Taliban or al Qaeda operatives? Not a single case."

Hasan alleged that US drone strikes in Pakistan's tribal areas were weakening democracy and risk pushing people towards extremist groups, and accused the US of "talking in miles" when it comes to democracy but "moving in inches".

Hasan acknowledged that there was little that Pakistan could do stop the drone attacks. "We cannot take on the only superpower, which is all-powerful in the world at the moment. You can't take them on. We are a small country, we are ill-equipped."

Claiming that anti-US sentiment in Pakistan was at a high, Hasan said, "Even those who were supporting us in the border areas have now become our enemies. They say that we are partners in these crimes against the people. By and large you will hardly find anybody who will say a word in support of the United States, because of these drone attacks."

The Bureau of Investigative Journalism is described as "a not-for-profit organisation" based at City University, London, which "bolsters original journalism by producing high-quality investigations for press and broadcast media with the aim of educating the public and the media on both the realities of today's world and the value of honest reporting". 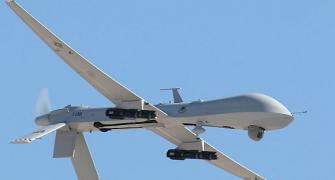 Let us do the dirty job, US drones can watch: Pak offers
US approves $1 billion aid to Pakistan for 2013

US blinks but Pakistan won't celebrate