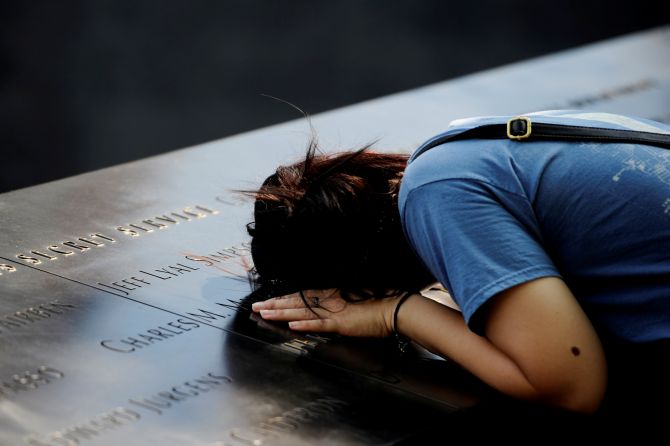 IMAGE: A woman lays her head on a row of names at the National September 11 Memorial, ahead of the 15th anniversary of the attacks in Manhattan, New York. Photograph: Mark Kauzlarich/Reuters

The United States marked the 15th anniversary of the September 11, 2001 attacks on Sunday, with a moment of silence marking the instant when a hijacked plane crashed and revealed that the deadliest terror attack on American soil was underway.

At Ground Zero, hundreds of victims' relatives and dignitaries gathered to hear the reading the names of the nearly 3,000 people killed under an overcast sky that shrouded the 1,776-foot-tall top of One World Trade Centre, the centrepiece of the rebuilt site. 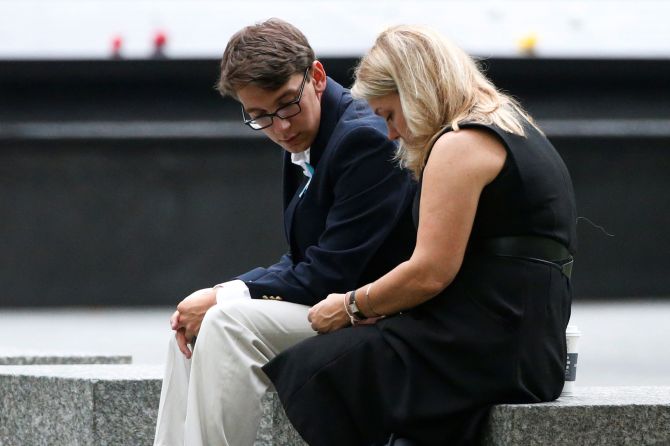 IMAGE: Guests sit near the memorial before the start of the ceremony. Photograph: Brendan McDermid/Reuters

Presidential candidates Donald Trump and Hillary Clinton momentarily paused their bitter rivalry and separately joined the people at the 9/11 memorial in downtown Manhattan to honour the 2,977 people killed and the thousands left injured when Al Qaeda terrorists crashed hijacked planes into the twin towers of the World Trade Centre. IMAGE: A woman pauses to read memorial ribbons tied to the exterior wall of St Paul’s Chapel on the morning of the 15th anniversary of the 9/11 attacks in Manhattan. Photograph: Andrew Kelly/Reuters

Moments of silence were observed at precisely the time the planes struck the twin towers, the Pentagon and the one that crashed into a field in Pennsylvania after its passengers overpowered the hijackers.

People carried pictures of their loved ones who died in the attacks and placed flowers and American flags in the names inscribed into bronze panels edging the twin reflecting pools at the memorial site.

The pools sit within the footprints where the TwinTowers once stood and the names of every person who died in the 2001 attacks as well as in the 1993 World Trade Centre bombing are inscribed into the Memorial pools. 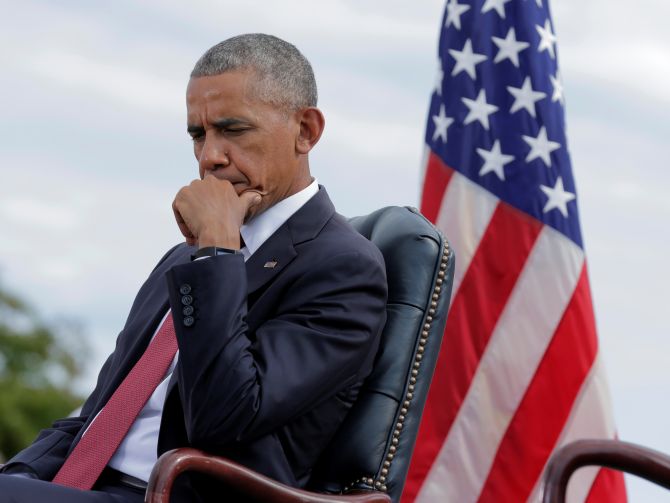 IMAGE: US President Barack Obama waits to speak during a ceremony marking the 15th anniversary of the 9/11 attacks at the Pentagon in Washington, US. Photograph: Joshua Roberts/Reuters

Every year at the solemn and emotional ceremony, those who were killed in the attacks are remembered by not just their families but by hundreds of visitors and tourists who attend the commemoration.

The memorial is visited by thousands of city residents and tourists daily to offer homage to those killed in the attacks. 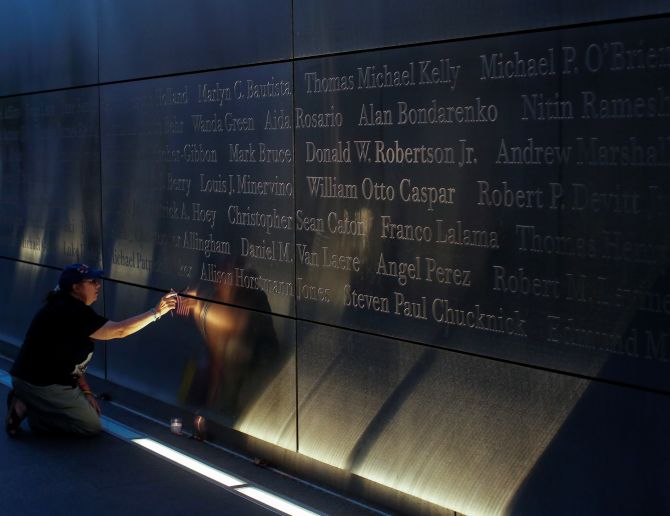 IMAGE: A mourner places a flag in the Empty Sky memorial on the morning of the 15th anniversary of the 9/11 attacks in New Jersey, US. Photograph: Andrew Kelly/Reuters

A new freedom tower, 'One World Trade Centre', now stands next to the memorial and a museum has also been erected that houses relics, including flags and equipment from the time the towers fell.

It tells the stories of the thousands of firefighters, ordinary citizens and law-enforcement authorities who helped save countless lives and toiled day and night to find the survivors in the wreckage.

The New York Police Department also held a memorial to remember those officers killed that day, reading out names of each of them. 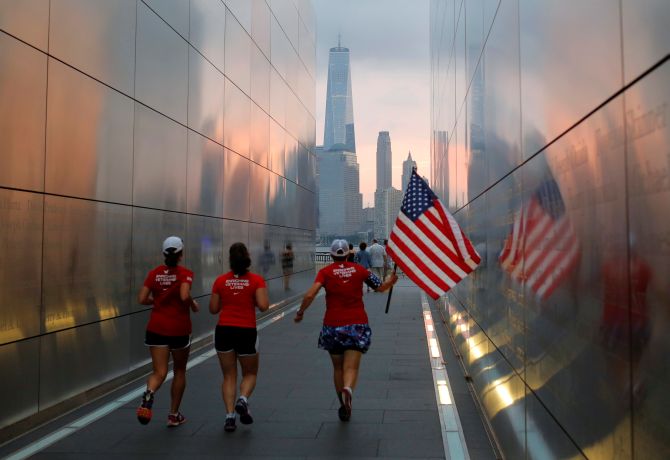 IMAGE: People run through the Empty Sky memorial at daybreak over lower Manhattan on the morning of the 15th anniversary of the 9/11 attacks, in New Jersey, US. Photograph: Andrew Kelly/Reuters

"September 11, 2001 touched every single NYer, but the terrorists did not prevail, because 15 years later we are strong, and we are unified," New York City Mayor Bill de Blasio said.

New York Governor Andrew Cuomo said flags will fly at half-staff on state buildings for the nearly 3,000 individuals who lost their lives in the 2001 terrorist attacks. 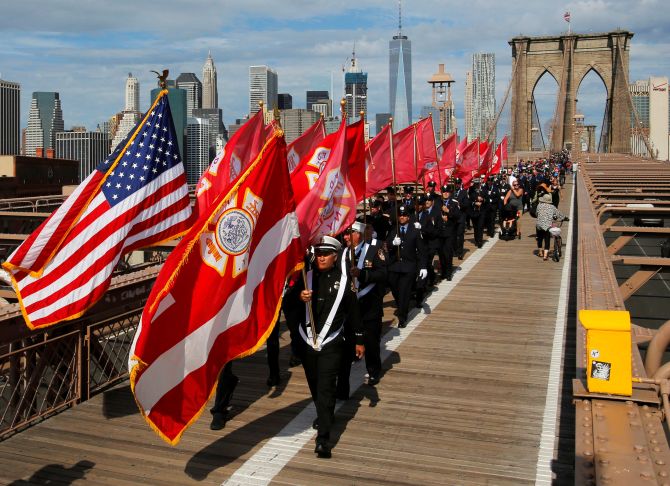 IMAGE: Members of Engine 219 Ladder 105 and fellow firefighters march to Brooklyn over the Brooklyn Bridge in honor of firefighters lost in the 9/11 attacks on the event's 15th anniversary in Manhattan, New York, US. Photograph: Andrew Kelly/Reuters

Two planes crashed into World Trade Centre, leaving 2,753 dead. A third hit the Pentagon in Washington, killing 184, and 40 more died after a fourth plane headed for Washington crashed into a field in Pennsylvania after passengers overpowered the hijackers.

Several Indians working in the twin towers and those in the area were among the victims. New Jersey resident Arjan Mirpuri lost his 30-year old son Rajesh that fateful day. Mirpuri had said his son did not even work at the World Trade Centre but had gone there that day to attend a trade show. 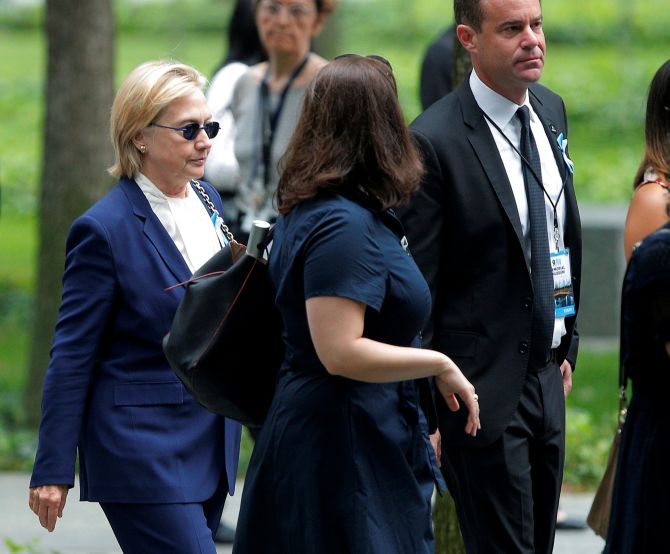 "Before that day, Rajesh had never gone to the WTC. 9/11 became the most unfortunate day of our lives," Mirupri had said.

The family and friends of 25-year-old Neil Shastri established a foundation in his name and to honour his life, which was taken away in the attacks. The Foundation said on its website that its mission is to continue Shastri's legacy by engaging in various philanthropic endeavours that reflect his generous spirit and passion for learning. 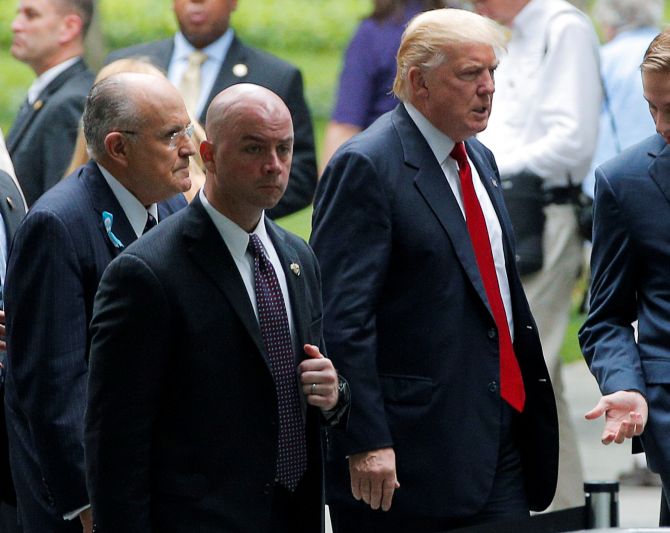 "Neil was taken from his wife, parents, brothers, and friends much too early and a left a void that will never be filled. Through the Neil G Shastri Foundation, Neil's family and friends hope that they are honouring his memory by touching a few lives and doing some good in ways that Neil was never able to do," the foundation said. 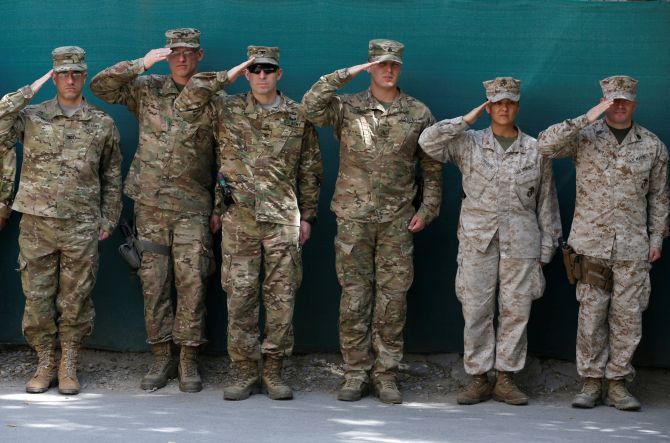 IMAGE: US soldiers salute during a memorial ceremony to commemorate the 15th anniversary of the 9/11 attacks, in Kabul. Photograph: Omar Sobhani/Reuters

Ceremonies will be held across the US to mark the 15th anniversary of the attacks that changed the country forever. US President Barack Obama had said in May 2011 that 'justice has been done' to 'those families who lost loved ones to Al Qaeda's terror' 10 years after the 9/11 attacks when US Navy Seals carried out a successful operation to kill the attacks’ mastermind Osama Bin Laden in a house in Pakistan.