US District Court Judge James Boasberg rejected a lawsuit seeking to force disclosure of the images, writing that the courts must defer to the conclusion President Barack Obama and military leaders reached that releasing them could spur violence against US troops and other Americans traveling abroad, Politico reported.

Judicial Watch, a government watchdog had asked the Defence Department and the Central Intelligence Agency to release any photos or video footage of the May 2 operation that killed bin Laden.

Though the defence department said it found no pictures or videos sought by the group, the CIA said it found 52 such records but refused to release them.

The CIA cited exemptions to the US Freedom of Information Act law for classified materials and other reasons. And Judicial Watch then approached the court.

"A picture may be worth a thousand words. And perhaps moving pictures bear an even higher value. Yet, in this case, verbal descriptions of the death and burial of Osama bin Laden will have to suffice, for this court will not order the release of anything more," Boasberg wrote in a 29-page ruling issued on Thursday.

"The court is...mindful that many members of the public would likely desire to see images of this seminal event. Indeed, it makes sense that the more significant an event is

to our nation - and the end of bin Laden's reign of terror certainly ranks high - the more need the public has for full disclosure. Yet, it is not this court's decision to make in the first instance," Boasberg added.
PTI
Source: PTI© Copyright 2022 PTI. All rights reserved. Republication or redistribution of PTI content, including by framing or similar means, is expressly prohibited without the prior written consent.
Related News: Central Intelligence Agency, Boasberg, Judicial Watch, US Freedom of Information Act, Osama bin Laden
Print this article
White House gate crasher to run for governor
NO change in US stand on denial of visa to Modi
Jan 16 troop movement was for training purpose: Govt 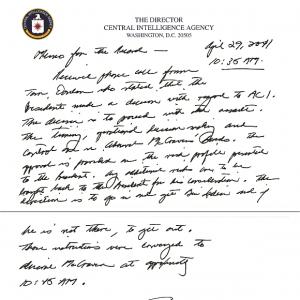