The United States tilt towards Pakistan and its overtures to China in the early 70s apparently led India to go ahead with the decision to conduct its first nuclear test in Pokharan in 1974, which caught the entire western intelligence by surprise.

A secret US State Department intelligence note, dated January 14, 1972, acknowledged that the American policy had an impact on India's decision making on nuclear weapons, saying there was "little doubt" that the then president Richard Nixon's announcement of his trip to China changed New Delhi's calculations.

The late US president, who was forced to step down in the wake of Watergate scandal, had troubled relations with India because of his tilt towards Pakistan in the 1971 Indo-Pak war and his moves to reconcile with China.

Declassified American documents of the era reveal that as of early 1971, all evidence indicated that the Government of India had decided to defer indefinitely the development and explosion of a test device. "In early August, however, the cabinet undertook a review of Indian nuclear policy in the wake of President Nixon's July 16 announcement of his proposed trip to China. There can be little doubt that the July 16 announcement has had major implications for India's security calculations and its nuclear policy," the six-page intelligence note said, which was released by the National Security Archive.

"In New Delhi's view, the announcement appeared to rule out all hope that India (not a signatory to the NPT) could anticipate a joint US-Soviet umbrella against the threat of Chinese nuclear attack," it said, adding that the decision to detonate a nuclear device may have been triggered by the deepening crisis in Indo-Pakistani relations.

"India may have concluded that an early test would demonstrate its increasing military strength to Pakistan and remind the latter's Chinese and American friends of its potential power," the intelligence note said.

"Although the immediate issue with Pakistan has been settled, a test still would probably be regarded as very useful by the Indians," it added.

The documents claim that US assessment was that a nuclear test would constitute dramatic support for India's contention that it is the only important power on the subcontinent. "India also may hope that a demonstrated nuclear capability would quash any thoughts of revenge the Pakistanis might still entertain," the State department said.

Six months later in June 1972, Henry Kissinger, the then secretary of state, wrote to president Nixon about intelligence reports which also came from other sources that India has decided to go nuclear.

"Such a test would likely affect the attitudes of the USSR and the People Republic of China toward South Asia, and would probably generate Pakistani pressures for enhanced security guarantees. Again, we should be carefully consider our position," Kissinger wrote in his note.

Analysing the latest round of declassified documents of the era, the National Security Archives writes that relations between New Delhi and Washington were already cool during the Nixon administration, which treated India as a relatively low priority.

"Henry Kissinger's secret trip to China underlined India's low priority by suggesting that if New Delhi ever faced a crisis with Beijing it could not count on Washington for help," it said.

"Relations became truly frosty during the balance of 1971 when New Delhi signed a friendship treaty with Moscow and India and Pakistan went to war. Later Nixon and Kissinger wanted to improve the relationship, but India's nuclear intentions were not on their agenda," the note said.

"That India had refused to sign the Nuclear Non-proliferation Treaty was a non-issue for Nixon and Kissinger, who had little use for the NPT and treated nuclear proliferation as less than secondary. While the State

Department cautioned India against nuclear tests in late 1970, concern did not rise to the top of policy hill," it added.

Whatever impact the events of 1971 may have had on India's decision to test a nuclear device that decision was soon to be made.

According to George Perkovich, an authority on the Indian nuclear programme at the Carnegie Endowment for International Peace, "it may be conjectured that support in principle for developing a nuclear explosive device was solidified by late 1971, that concentrated work on building the vital components began in spring 1972, and that formal prime ministerial approval to make final preparations for a PNE occurred in September 1972."

In this context, the reports collected by US intelligence in late 1971 and early 1972 about a possible test may have been good examples of the old chestnut that "where there's smoke, there's fire," observed the National Security Archive. Despite all this the Nixon administration decided not to give this a priority.

Special National Intelligence Estimate published in August 1972 also held that the Indians could produce a device "within a few days to a year of a decision to do so," but concluded that the chances that India had made a decision to test were "roughly even".

The Nixon White House was focused on the Vietnam War and grand strategy toward Beijing and Moscow; intelligence on nuclear proliferation was a low priority, it said.

Another group of secret telegrams coming from the US embassy in Tokyo disclosed that one Japanese diplomat made a good guess about what was happening in India. In response to a request from the US State Department,

Ryohei Murata, a Japanese diplomat, reported that the Japanese government believed that for prestige reasons and as a "warning" to others, the "Indians have decided to go ahead with a nuclear test" which could occur at "any time".

The Japanese also told them that the Thar Desert in Rajasthan would be the test site. However, the subsequent cable from the US Embassy in Japan, raised doubts about Murata's assessment. 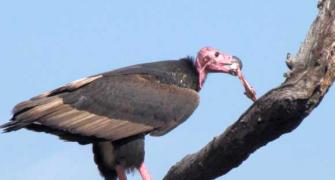 Babri demolition anniversary: Security stepped up in UP

Salman Bashir to be new Pak High Commissioner in India