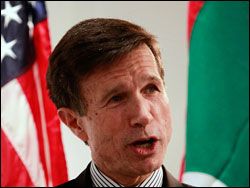 In perhaps what could be his swansong appearance as the Obama administration’s point man for South Asia, Robert Blake has acknowledged that the impasse over the implementation of the US-India civilian nuclear deal poses many challenges to Washington and New Delhi.

Blake, testifying before the House Foreign Affairs Subcommittee on Asia and the Pacific, which has jurisdiction over matters pertaining to South Asia, told lawmakers that the nuclear deal was “one of the really transformative deals that was done in the course of Bush administration,” and that the “Obama administration came in determined to try to continue that momentum.”

While noting that “there's been some progress,” he said, “There are also still many challenges ahead.”

Highly placed sources have said that Blake, one of the most popular and likeable diplomats in South Asian circles, would soon be nominated by President Barack Obama to be the new US ambassador to Indonesia.

The sources said that the new Secretary of State John F Kerry had not yet made a decision on who he would recommend to the president to be the new assistant secretary of state for South Asian Affairs, and till then Blake would remain in his post.

In his interaction with lawmakers Tuesday, following their concern over the Indian Parliament’s nuclear liability law throwing a spanner into the deal, Blake acknowledged that the nuclear liability law was an anathema to US business and industry that had lobbied so vigorously for the passes of the deal in the US Congress now nearly five years ago.

“One challenge is that India passed a nuclear liability law that our companies do not agree with and do not think provides them sufficient protection from possible liability suits,” he said.

Thus, Blake said, “We have focused most of our efforts on trying to negotiate with the Indians and support our company's efforts to negotiate what are called early works agreements that are things like site preparation and early contracts and things like that that could again pave the way for future civil nuclear contracts.”

He pointed out that “the Indians have set aside several areas in Gujarat and in Uttar Pradesh for American companies to eventually build such plants and we continue to work through our liability concerns with the Indian government.”

“So we hope very much this year that one of these early works agreements can be signed by Westinghouse and the Nuclear Power Corporation of India Limited,” he said, but reiterated, “There has been progress but again, much work needs to be done.”

Earlier, the chairman of the subcommittee, Steven Chabot, Ohio Republican, said, “The 2008 Indo-US Civilian Nuclear Agreement was considered a watershed moment for US-India relations,” but that “the nuclear liability issues has created an obstacle to US firms.”

He also bemoaned that “four years later, many believe that it has failed to tie India closer to the US-led global nonproliferation and arms control architecture. India has made no efforts to sign the Comprehensive Test Ban Treaty or to voluntarily halt its production of fissile materials.”

Blake took strong exception to Chabot’s contention that India’s nonalignment had made a strategic partnership with the US, “a strategic nightmare.”

“With respect to your comment about how India's nonaligned, actually I would respectfully disagree. India has moved very, very -- much closer to us now on defense cooperation,” he said, and pointed out, “We now have the largest exercise program of any country in the world with India, and all three of their services very much appreciate the opportunity to exercise with ours, and there is a growing coordination in that respect.”

Blake continued, “Likewise, our defense sales relationship has grown from virtually nothing to more than $9 billion (Rs 48,708 crore), with several billion more of sales pending now. So again, our militaries are growing much closer together and there's great interest in developing closer interoperability and closer working relationships, and we'll certainly continue to build on those.”

Meanwhile, Congressman Dana Rohrabacher, California Republican, said, “It is a travesty that the United States has such an integrated economy and our economic well-being is so tied to the world's worst human rights abuser, namely China, and that we have not developed as much economic relationship and as great an economic relationship as we have with India.”

He said, “Let's hope in this session of Congress we recognise that China is playing an increasingly negative role that's got to be addressed. And it will be addressed by our relationship with other countries in Asia like India.”

Rohrabacher asserted that “today, we see the Chinese supporting -- for example, Pakistan… this state sponsor of terrorism. They are trying to take -- have a power grab for the rare minerals, the oil, the gas and other natural resources of Central Asia.”

Blake however, attempted to rebut the assumption that a strategic partnership with India meant a corresponding containment of China, and took pains to explain the burgeoning ties between New Delhi and Beijing.

“We have been very proud of the progress we've made in our relations with India…and India itself has made tremendous progress in its relations with China, particularly on the economic front, where their trade is almost $70 billion now and is their fastest-growing trading partner.”

He reiterated, “We're not seeking to contain China, we're trying to engage China as much as possible. And certainly, in my four years working on this job, I've spent a lot of time trying to get China to work more closely with us on our central objectives in places like Afghanistan, to get them to invest more in the infrastructure there.” 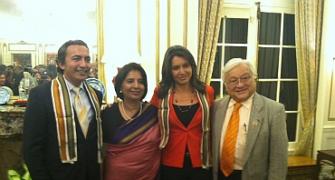 It's time for us to begin dialogue with Modi: US house rep