Obviously having gotten the green light from the Prime Minister's Office in New Delhi that if they lobby the Speaker to address a joint session of Congress, which he has not been able to do despite his three visits to the US, the Congressmen informed Paul Ryan that 'It is our understanding that if invited, the prime minister would accept.'
Aziz Haniffa/Rediff.com reports from Washington, DC.

The chairman of the United States House Foreign Affairs Committee Chairman Ed Royce, California Republican, and the Ranking Democratic member of this influential committee, Eliot Engel of New York, have sent a letter to House Speaker Paul Ryan, requesting that Prime Minister Narendra Modi be granted the opportunity to address a Joint Meeting of the US Congress when he visits Washington, DC in June.

In the letter to Speaker Ryan, Royce and Engel -- joined by the co-chairs of the Congressional Caucus on India and Indian Americans, US Representatives George Holding, North Carolina Republican, and Dr Amerish 'Ami' Bera, California Democrat, the only Indian American member in the US Congress -- informed Ryan that 'Indian Prime Minister Narendra Modi is expected to visit Washington on June 7th and 8th of this year and given the depth of our relationship with India across a range of areas -- defence, humanitarian and disaster relief, space cooperation, conservation, and innovation, -- we believe this is an ideal opportunity for the Congress to hear directly from the prime minister.'

'Therefore, we ask that you invite Prime Minister Modi to address a Joint Meeting of Congress.'

Obviously having gotten the green light from the Prime Minister's Office in New Delhi that if they lobby and push the Speaker to provide Modi with an opportunity to address a joint session of Congress, which he has not been able to do thus far despite his three visits to the US, the members informed Ryan that 'It is our understanding that if invited, the prime minister would accept.'

Making the case for such an invitation, Royce, Engel, Holding and Bera wrote to Ryan that the partnership with India is based on a 'foundation of shared values, including the rule of law, electoral democracy, and religious pluralism'

'This renewed partnership has found champions in the leadership of both parties, including both President Clinton and President George W Bush, and has been further emboldened in the United States by a strong, proud, and growing Indian-American Diaspora,' they added.

'The US-India relationship has seen significant growth,' the lawmakers pointed out, and also recalled that 'President Obama has visited India twice, and Prime Minister Modi reciprocated with two trips of his own to the United States.'

'Our two countries have signed a defence framework agreement to increase military cooperation and the civilian nuclear agreement, signed in 2008, will result in the construction of nuclear power plants in India,' they added.

'Additionally, the United States and India are forging closer ties to address humanitarian crises, such as the aftermath of the earthquake in Nepal, in the renewable energies sector, and in space exploration.'

'It is no wonder that the partnership has been characterised as the defining partnership of the 21st century,' the lawmakers declared.

'The US-India relationship consistently garners strong bipartisan support,' they reiterated in the letter to Ryan, and that 'by inviting Prime Minister Modi to address a Joint Meeting will allow Congress to express support for this special global partnership.'

Congressional sources told Rediff.com that the four lawmakers would also garner more support for their request by convincing several other members of Congress to also write to Ryan, urging him to invite Modi to address a joint session, particularly those lawmakers who belong to the India Caucus, the largest country caucus in the US Congress.

These sources urged the Indian-American community to also form "a critical mass" and also write, mail, call Ryan's office, regarding such an invitation.

They also wanted the significant Indian-American community who live in Ryan's constituency in Wisconsin and know him quite well since he has been very supportive of the community and has attended several of their events and functions, to also weigh in and convince him to send out an invitation to Modi to address a joint session.

According to these sources, it was highly likely that if all of these groups came together and launched a concerted effort and supported the initiative by Royce, Engel, Holding and Bera, "you bet it's going to happen considering the bipartisan support India enjoys in Congress, which Speaker Ryan is very familiar with in addition to friends and supporters he has in Wisconsin and the interactions he has had with them over the years." 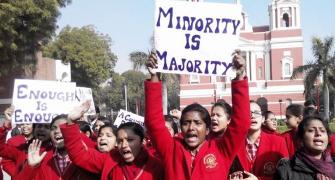