Source: PTI
May 03, 2012 11:44 IST
The annual high-level strategic and economic dialogue between the United States and China began in Beijing on Thursday with Chinese President Hu Jintao calling for a "new type of relationship" between the two countries to break the traditional belief that big powers only have conflicts.

Inaugurating the two-day talks attended among others by US Secretary of State Hillary Clinton and Treasury Secretary Timothy Geithner, Hu said China and US should break traditional belief that big powers will enter into conflicts and seek new ways to develop ties.

"Whatever changes may take place in the world and no matter how the domestic situations in our two countries may evolve, China and the US should be firmly committed to advancing the cooperative partnership and build a new type of relations between major countries that is reassuring to peoples from both the countries and the world," Hu said.

The two countries should think creatively to build such a new type of relationship, he said.

The dialogue began amid controversy over the blind Chinese activist Chen Guangcheng seeking shelter in the US embassy in Beijing as well as tensions between Philippines and China over disputed islands.

US officials escorted Chen out to a hospital on Wednesday. China demanded an apology for the embassy for sheltering him.

Also Philippines and Chinese naval vessels are currently patrolling the disputed waters of an island in the South China Sea in a stand off and Manila sought Washington's assistance to counter Beijing's moves.

In his speech, Hu recalled how former US President Richard Nixon's visit to Beijing changed the bilateral ties 40 years ago and said that both sides need to advance the relationship with the times with new thinking, policies and actions.

Handle China like a Test match, not a Ranji match
Myanmar, the US, China: Shifting sands 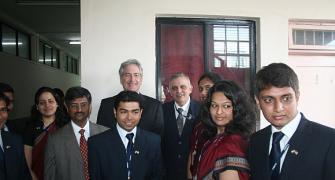 Is US indirectly asking India to contain China?