Indian democracy is powered by its free-thinking citizens and the United States applauds the country as a 'force for good' in defence of a free and open Indo-Pacific as well as for a free and open world, US Secretary of State Antony Blinken said on Wednesday after holding talks with External Affairs Minister S Jaishankar on a range of pressing issues. IMAGE: Secretary of State Antony Blinken bids farewell as he boards his plane at New Delhi Palam Airport to depart for Kuwait from New Delhi on Wednesday. Photograph: ANI Photo

India and the US also made a strong push for the intra-Afghan peace process to end violence in Afghanistan and ensure that it does not become home to terrorism, and vowed to deepen cooperation in the Indo-Pacific and on COVID-19 response and economic recovery.

The discussions also covered the expansion of cooperation under the Quad framework, maritime security issues, counterterrorism, connectivity, climate change, education, the situation in Myanmar and ways to ensure resilient and reliable supply chains.

"There are few relationships in the world that are more vital than the one between the United States and India. We are two of the world's leading democracies, and our diversity fuels our national strength," Blinken said at a joint media briefing with Jaishankar at the end of the talks.

The US Secretary of State said his country looks at India through the prism of shared democratic values and that there are challenges that can be 'ugly' which needed to be dealt with 'openly'.

"I think one of the elements that Americans admire most about India is the steadfast commitment of its people to democracy, to pluralism, to human rights, to fundamental freedoms.

"That's, in our minds, one of the ways that we define India. And we see ourselves reflected in that, and it's in part why our shared values strengthen the relationship," he said.

"Like our own, India's democracy is powered by its free-thinking citizens. We applaud that, and we view Indian democracy as a force for good in defence of a free and open Indo-Pacific -- indeed, a free and open world," he added.

Blinken said the most remarkable democratic elections in the world, in many ways, are in India.

"It's the largest expression of free political will by citizens anywhere on Earth. So I say all this because as friends, we talk to each other about these issues. We talk about the challenges that we're both facing in renewing and strengthening our democracies," he said.

Blinken was replying to a question.

"We also recognise that every democracy, starting with our own, is a work in progress. And when we discuss these issues, I certainly do it from a starting point of humility. We've seen the challenges that our own democracy has faced in the past and faces today," he said.

But this is, in a sense, common to all democracies, he noted.

"We -- I mentioned this earlier -- we talk about in our founding document the search for a more perfect union. That, by definition, means that we're not perfect and that our entire quest is to get closer and closer to the ideals that we set for ourselves," he said.

"And that's how societies make progress. And sometimes we -- we're at moments when the challenge is painful. It can even be ugly. But as democracies, we deal with it openly," he observed.

He said ultimately, "I think we have in our democracies self-righting mechanisms that are made up of free citizens, of different backgrounds, different faiths, a free media, independent courts, powered by a system of free and fair elections".

Blinken said the most remarkable democratic elections in the world, in many ways, are in India, just by sheer numbers.

"It's the largest expression of free political will by citizens anywhere on Earth. So I say all this because as friends, we talk to each other about these issues. We talk about the challenges that we're both facing in renewing and strengthening our democracies," he said.

Blinken said both countries can learn from each other as no democracy, regardless of how large or how old, has it all figured out.

"And we celebrate that the world's oldest and the world's largest democracies are dedicated at heart to a shared set of values that I believe will ensure not only the ultimate success of democracy, but the success of the relationship between India and the US," he added.

One, he said that the quest for a more perfect union applies as much to the Indian democracy as it does to the American one and indeed to all democracies.

"Two, it is the moral obligation of all polities to really right wrongs when they have been done, including historically and many of the decisions and policies you have seen in the last few years fall in that category.

"And third, that freedoms are important, we all value them but never equate freedom with non-governance or lack of governance or poor governance. They are two completely different things. We had a good conversation and I am sure we will continue that conversation," he added.

On Afghanistan, Blinken said both sides 'largely' see Afghanistan in the same light.

"We're both committed to the proposition that there is no military solution to the conflict that afflicts Afghanistan. There has to be a peaceful resolution which requires the Taliban and the Afghan Government to come to the table," he said.

"And we both agree, I think strongly, that any future government in Afghanistan has to be inclusive and fully representative of the Afghan people. But ultimately, this has to be an Afghan-led and Afghan-owned peace process that we will all support," he added.

Blinken also noted both India and the US are not only in 'alignment', but working together and also working with other countries, both neighbouring Afghanistan and in the region, to support Afghanistan's stability and development.

"Even as we withdraw our forces from Afghanistan and NATO and others withdraw their forces, we remain very much engaged in Afghanistan," he said.

"We have not only a strong embassy there, but also important programs that continue to support Afghanistan economically, through development assistance, through security assistance," he added.

On Quad, Blinken said it is not a military alliance and that its purpose is just to advance cooperation on regional challenges while reinforcing international rules and values that 'we believe, together, underpin peace, prosperity, and stability in the region'. 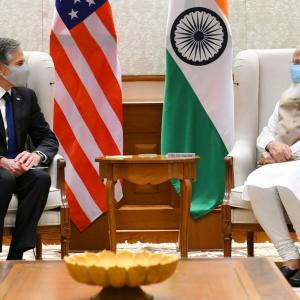 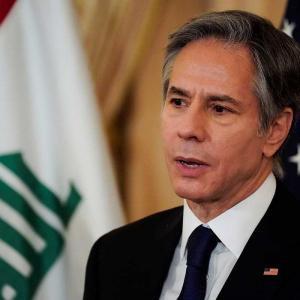