Incumbent Hamid Ansari is the United Progressive Alliance's candidate for the Vice President's post and he is all set to get a second consecutive term.

The name of Ansari, 75, was announced by UPA chairperson Sonia Gandhi at a meeting of the Congress-led coalition at Prime Minister Manmohan Singh's residence.

A career diplomat, Ansari was the only choice of the UPA at the meeting, also attended by Trinamool Congress representative and Railway Minister Mukul Roy.

Roy, whose party had opposed Pranab Mukherjee's candidature for the President's post in June, is believed to have suggested the name of former West Bengal governor Gopalkrishna Gandhi and former Member of Parliament Krishna Bose.

However, he applauded the candidature of Ansari once Gandhi announced it.

Neither the UPA chairperson nor the prime minister reacted to his suggestions.

The prime minister proposed Ansari's name and sought the suggestions of the leaders present. Later, Gandhi made the announcement.

As of now, Ansari enjoys a clear edge in the poll, to be held on August 7.

In an electoral college of 790 MPs, he has the likely backing of over 500 MPs. In the last election, he had polled 455 votes against 222 of Najma Heptullah fielded by the National Democratic Alliance. Rashid Masood of the now defunct United National Progressive Alliance had got 75 votes.

At that time, Ansari's candidature was floated by the Left parties, which outside supporters of the UPA. Home Minister P Chidambaram later said "all leaders" present at the UPA meeting "accepted" the candidature of Ansari.

But Roy made it clear that he had not supported Ansari's candidature.

"As the agenda of this meeting was not known to us, we proposed two names -- that of Gopal Krishna Gandhi and Krishna Bose -- as candidates for the vice presidential election. But as Ansari's name was proposed by the Congress, we said we will take a decision after consulting with our leadership," he told reporters.

"I will convey today's decision to our party leadership and we will let you know our decision soon," he said.

The prime minister and Gandhi spoke to Ansari and offered him their congratulations, Chidambaram said.

The vice president accepted his nomination. 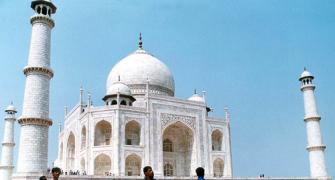 Hamid Ansari set to get a second term as VP

Mamata's Prez choice to define her future with UPA