UPA has forced the passage of bill: JD(U)

The support of a majority of his own party MPs to the legislation notwithstanding, JD (U) president Sharad Yadav on Tuesday accused the UPA of forcing through the Women's Reservation Bill in the Rajya Sabha and said constitutional amendments should only be passed after evolving a consensus.

"You cannot push through a Constitutional amendment. It is only done after evolving consensus," Yadav told reporters.

Noting that the then prime minister Atal Bihari Vajpayee too could have passed the bill during his tenure, Yadav said, "He (Vajpayee) had the majority. But he believed in consensus."

When asked how he could talk of consensus amongst so many parties when there were sharp divisions within his own party, Yadav said, "My party is a small issue and I am discussing a national issue."

He said during his meeting with the Prime Minister Manmohan Singh this morning, he had requested him to convene an all-party meeting and defer voting on the bill in the Upper House.

"All those who have reservations on the Bill should be heard. I wanted all parties to listen to the reservations of those opposing the bill in its present form," he added. 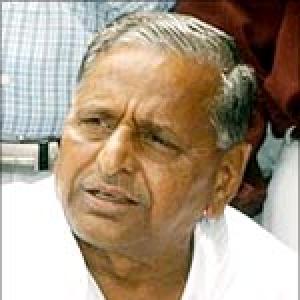