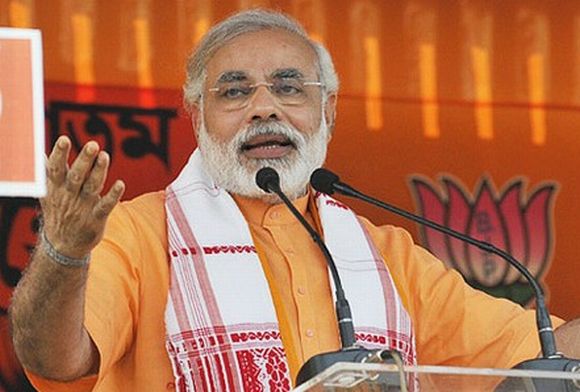 The Bharatiya Janata Party aims to use the surgical strikes as a way of attracting voters across the states, especially in poll-bound Uttar Pradesh. Archis Mohan reports.

The BJP has planned a series of public rallies of its top leaders like Prime Minister Narendra Modi and Defence Minister Manohar Parrikar across the country, but particularly in poll-bound Uttar Pradesh.

The rallies will be used to drill home the message of the “political will” that Modi government has shown to launch ‘surgical strikes’ against Pakistan-based terrorists.

A BJP leader on Thursday said surgical strikes will be the main election plank of the party in UP. While the party is still undecided about announcing a chief ministerial candidate, the leader said the nationalistic fervour that has enveloped the people of the country, including in UP, will overcome caste-based loyalties.

On Friday, the PM will address an ex-servicemen conference in Bhopal. He will also inaugurate a war memorial, a ‘Shaurya Smarak’, built over 12.67 acres and which commemorates the sacrifice of Indian soldiers in the wars and battles of 1947, 1962, 1965, 1971 and the Kargil conflict of 1999. Defence Minister Parrikar will also be present.

The top BJP leader also disabused any impression that the party was unhappy with Parrikar’s public statements on the surgical strikes by the Indian Army. “I pity the intelligence of those who think the defence minister of the country shouldn’t speak on the issue of surgical strikes,” the leader said.

Modi government ministers, BJP leaders and cadres had carried out ‘tiranga yatras’ across the country to coincide with this year’s Independence Day celebrations. The aim of these ‘yatras’ was to evoke a sense of nationalism. A large majority of these events were organised in UP. Party sources believe the Uri terror attack and the subsequent surgical strikes have consolidated this sense of nationalism.

The leader, in an informal interaction with media persons, said the party was confident of reaching the majority mark in UP, wrest Uttarakhand from Congress, retain Goa but indicated the Congress, and not the Aam Aadmi Party, was in the forefront in Punjab. The state currently has a Shiromani Akali Dal-BJP coalition government.

The BJP will also launch a series of ‘Parivartan Yatras’ in UP on November 5. Party President Amit Shah will flag off these ‘yatras’, which will culminate in Lucknow on December 24, the birth anniversary of former PM Atal Behari Vajpayee.

The party’s assessment is that there are at least 10 million families in UP with a relative serving in the Indian defence forces. The party believes its popularity has surged in the state after the surgical strike and it is headed for a majority in the 403-member UP assembly. The BJP leader said the party still considers incumbent Samajwadi Party as its challenger since its core vote bank is intact, while Mayawati-led Bahujan Samaj Party was nowhere in the race and betraying desperation with its call to Muslims for support.

The BJP believes it has succeeded in dispelling the propaganda among Dalits of UP, which comprise a fifth of the state’s population and considered core support base of the BSP. The BJP sponsored six-month long ‘dhamma chetana yatra’, to reach out to Dalits, will culminate in the presence of the BJP chief in Kanpur. The ‘yatra’ held nearly a thousand public events during its journey across UP.