UP govt refuses sanction to prosecute Adityanath in 2007 riots case The Uttar Pradesh government has refused to grant sanction for the prosecution of Chief Minister Yogi Adityanath in a decade-old communal riots case, the state’s top bureaucrat told the Allahabad high court on Thursday.

The riots in Gorakhpur in January 2007 were sparked allegedly after a provocative speech by Adityanath, the then local MP, over the killing of a Hindu youth in clashes between Hindu and Muslim groups during a Moharram procession. The BJP MP was arrested and remained in jail for 10 days before getting bail from a court.

An affidavit stating that sanction has been ‘refused’ for prosecuting Yogi Adityanath in the case was filed before the high court by Chief Secretary Rahul Bhatnagar.

The sanction is needed to file a chargesheet against Yogi Adityanath under Indian Penal Code Section 153-A on the charge of promoting enmity between different groups on grounds of religion and caste. This offence is punishable with imprisonment of up to five years.

A request from the UP police to the state Home Department seeking sanction to prosecute the case where Yogi Adityanath is an accused along with four others including party MLA from Gorakhpur Radhamohan Das Agarwal is hanging fire for two years.

The chief secretary had been asked to appear in person on Thursday by a May 7 order by a division bench comprising justices Ramesh Sinha and Umesh Chandra Srivastava.

In his affidavit, Bhatnagar also stated that the CB-CID, which has been investigating the case registered in connection with the riots, has proposed to submit its closure report and it will be submitted before the trial court.

The development came during hearing of a petition seeking an independent probe into the violence.

The petition was filed by Parvez Parwaz, the complainant in the first nformation lodged at Cantonment police station of Gorakhpur in connection with the riots and Asad Hayat, a witness in the case.

The petitioners moved the high court seeking an investigation into the case by an independent agency.

The petitioners’ counsel S F A Naqvi challenged the state government's stand in declining to grant sanction for the prosecution of the chief minister.

“We challenged the state government's stand and submitted before the court that the chief secretary happens to be a subordinate of the chief minister, who is himself an accused.

“The refusal to grant sanction is tantamount to an accused declining to prosecute himself,” Naqvi said.

The court gave permission to do so by the next date of hearing on July 7, he said.

However, arguing on behalf of the state government, Advocate General Raghavendra Singh told the court that the case filed in Gorakhpur was ‘politically motivated’ and that it was registered 10 months after the communal riots broke out.

He also informed the court that the decision to refuse grant of sanction for prosecuting the accused was taken by the state’s principal secretary (home) upon the advice of the law department which gave its opinion ‘on the basis of report of forensic examination of a CD containing hate speeches allegedly given by some of the accused’.

Naqvi said the court was told by the petitioners that Yogi Adityanath has himself, in an interview to a private news channel, which is available on YouTube, ‘admitted’ to having made the alleged incendiary speeches for which he has been named in the FIR lodged at Gorakhpur.

“We requested that the court ask for the video recording to get a first-hand account.

“The court responded to our submission by asking the state government to file an affidavit on the next date of hearing explaining why a recording of the said interview cannot be submitted,” he added. 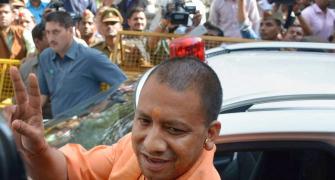 UP school orders students to get 'Yogi haircut' 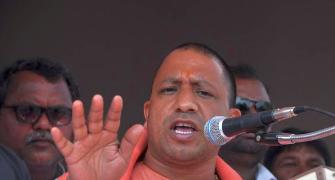 UP CM says silence on triple talaq like 'Draupadi' episode