The largest-ever study on caste-based discrimination and segregation against Dalits has found that untouchability is still practiced widely across Gujarat, despite the practice being abolished by the Constitution, according to the Robert K Kennedy Centre for Justice and Human Rights based in Washington, DC.

The 56-page study, titled 'Understanding Untouchability: A Comprehensive Study of Practices and Conditions and released in Washington on Wednesday,' was conducted by the RFK Center along with the NavSarjan Trust.

It is the largest data gathering effort to date on the topic and had been conducted in 1,589 villages with 5,462 respondents and collected by 106 Navsarjan members in Gujarat.

The report said it addressed almost all known untouchability practices, including the segregation of housing, drinking-water wells, places of religious worship, and separate sitting arrangements in schools and public events between "touchable and untouchable castes, which continue to be nearly universally practiced across villages in Gujarat, despite national laws banning such actions."

The report said it was the outcome of three years of intensive research, and noted that the methodology was to outline a framework for "quantifying a diverse range of human rights abuses against Dalits, collecting data and producing analysis that surpasses all previous examinations of this issue."

She said, "It is our hope that these findings will provide critical information for the Dalit movement to shape its interventions, for the government of India to seriously and systematically examine, as well as address, its own gaps in ending discrimination, and for the international community to apply similar approaches to ending discrimination globally."

Manjula Pradeep, executive director of Navsarjan Trust, said, "This study provides advocates with the information they need to see strengths and weaknesses in the current laws protecting the human rights of Dalits."

"The continued prevalence of these demeaning and hateful practices across all communities shows that the legal system is failing to address untouchability, including between the Dalit sub-castes, and the time for action is now," she said.

The report, according to Varma, was envisioned by the founder of the Navsarjan Trust and 2000 RFK Human Rights Laureate Martin Macwan and RFK Global Advocacy Team members, including Dr Christian Davenport, professor of Peace Studies, Political Science and Sociology at the Kroc Institute of the University of Notre Dame, Allan Stam at the University of Michigan and David Armstrong at the University of Wisconsin.

Macwan said that the report was "crucial to ending untouchability," and claimed that "Dalits face discrimination and violence in every aspect of their lives."

"By lifting the veil of ignorance, we have no excuse not to end it," he added.

Davenport, a co-author of the study, said it "provides not only new data but a framework for the unpacking of the complexities of untouchability in particular but discrimination in general."

"We hope that this new approach will help bring the development of solutions within the grasp of government officials, activists, religious institutions, and all of society," he said.

The Navsarjan Trust is the largest state-level organisation that works for Dalits, and covers more than 3,100 villages in Gujarat. 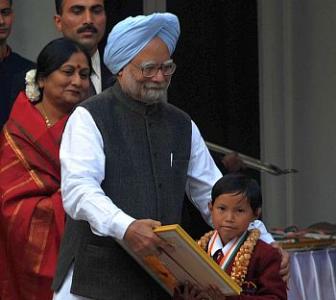