News
Business
Movies
Sports
Cricket
Get Ahead
Money Tips
Shopping
Sign in  |  Create a Rediffmail account
Rediff.com  » News » 'Unless someone is to be hanged, evicted': CJI Ranjan Gogoi on urgent hearings

'Unless someone is to be hanged, evicted': CJI Ranjan Gogoi on urgent hearings 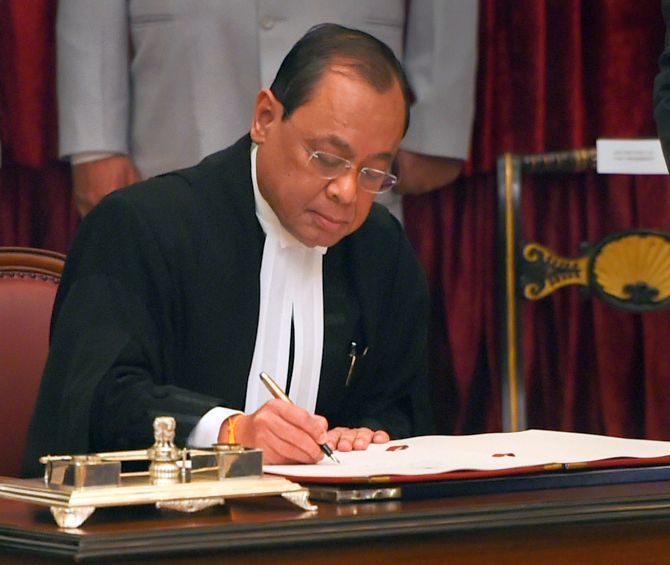 IMAGE: Justice Ranjan Gogoi signs the register after taking his oath of office on being appointed as the 46th Chief Justice of India, at Rashtrapati Bhavan in New Delhi on Wednesday. Photograph: Shahbaz Khan/PTI Photo

Justice Ranjan Gogoi, who took over as the Chief Justice of India on Wednesday, came out with a new roster allocating cases to various benches, and decided that the Public Interest Litigation matters will be heard by him and a bench headed by Justice Madan B Lokur, who is next in seniority to him.

After the swearing-in at the Rashtrapati Bhavan, Justice Gogoi came back to the Supreme Court and presided over the bench along with Justices S K Kaul and K M Joseph in Court number 1, the CJI's court.

The new CJI began the day by telling lawyers that fresh parameters would be worked out for mentioning the matters for hearing of cases which require hearing on priority and urgent mentioning.

Justice Gogoi, who took oath as the 46th CJI, said 'no urgent mentioning of cases will be allowed' till certain parameters are fixed for it.

"We will work out the parameters, then we will see as to how mentioning will be done," he said.

"If somebody is going to be hanged tomorrow, then we can understand (urgency)," the CJI added.

The Supreme Court website showed the roster of the work for fresh cases notified under the order of the Chief Justice of India with effect from October 3 till further orders.

The CJI has decided to keep with himself the PIL and the petitions based on the letters received.

The bench headed by him will also deal with the matters relating to social justice, elections, company law, Monopoly and Restricted Trade Practices, Telecom Regulatory Authority of India, Security Exchange Board of India, Insurance and Reserve Bank of India.

Besides the matters pertaining to the judicial officers and Commissions of Enquiry, would also be allocated before the bench headed by CJI.

Justice Gogoi has also allocated the PIL and letter-based matters to the bench headed by Justice Lokur whose bench will also be seized of matters of land acquisition and requisition and service.

Justice Lokur's bench which is already allocated social justice matters will continue with it along with the matters relating to forest, environment, wild life and ecology.

Personal law matters, religious charitable endowments and issues of mines, minerals and mining leases would be allocated to the bench headed by Justice Lokur which will also take up the matters of land laws and agriculture tenancies, consumer protection and issues relating to armed forces and paramilitary.

Justice Kurian Joseph, who is third in seniority will have matters relating to labour, rent, service, family and criminal cases.

The bench headed by Justice Joseph would also share with the bench of CJI the matters relating to contempt of court.

The allocation of work for Justice Joseph includes ordinary, civil, personal law along with religious and charitable endowments. His bench will also deal with simple money and mortgage matters.

Besides, his bench has been assigned matters of land laws, agriculture and tenancy and also pertaining to the Supreme Court, High Courts, others courts and the tribunals.

Justice A K Sikri, the fourth senior most judge, will also share the matters relating to contempt of court and his bench will deal with taxes matters -- both direct and indirect and also the election petitions.

His bench would also deal with the personal law matters and also those pertaining to employees of the apex court, high courts and other judicial bodies.

Indirect tax matters have also been allocated to the Justice S A Bobde, the fifth senior most judge and the new entrant to the five-member apex court collegium, who will also adjudicate upon the matters relating to academics, arbitration, compensation, criminal, family law and ordinary civil cases.

Justice Bobde's bench has also been allocated with the matters concerning mercantile laws, commercial transactions including banking and admissions to educational institutions other than medical and engineering.

His bench has also been allocated with the matters of admirality, maritime law, admission/transfer to engineering and medical colleges and also matters relarting to leases, government contracts and contracts by local bodies.

'Trying to evolve a system to reduce pendency of cases'

Later, at an event organised by the Supreme Court Bar Association to felicitate him on his elevation as the country's top judge, Justice Gogoi also said he and his colleagues were trying to evolve a system to produce better results and reduce pendency of cases, as he expressed hope that vacancies in subordinate courts would be filled in three to four months.

He said filling up the vacancies were not a problem but ‘getting the right man’ was.

"The solution lies in getting the right man, and the right man will come only if the office maintains its aura and dignity. This is what I wanted to convey," Justice Gogoi said.

Speaking at the event, Attorney General K K Venugopal reiterated his demand to increase the salary and retirement age of judges of the apex court and high courts.

Responding to the AG's demand, Justice Gogoi said, ‘both are related’, adding, ‘unless other issues faced by the institution are tackled’, it's not going to work.

In his first public event after being elevated as the CJI, Justice Gogoi said the bar has a rich and illustrious legacy, and urged lawyers to ‘keep it up’.

Justice Gogoi responded to the statement of the bar association president Vikas Singh, who said the present CJI is a ‘strict’ man.

"Mr Vikas Singh said I am a strict man. I am what I am. I can't change," Justice Gogoi said.

A-G Venugopal said there should be an increase in the age of judges in the Supreme Court and the high courts and in the interest of judiciary, the age of retirement of judges of the higher courts should remain the same.

"This would result in a lot of heart burning to prevent the judges of the high court from coming to the Supreme Court and then meeting with the judges of the collegium to put over their cases personally to the chief justices of high courts to be allocated to the Supreme Court and so on and so on," he said, adding, ‘which I think is a very, very bad habit for judges who are supposed to be independent and so on’.

On salary of the judges of the higher courts, he said it should be at least 3-4 times.

He said most of the advocates in subordinate courts have no place to sit and they make use of pavements and tree shades.

"We are looking up to the committee of lawyers or are we concentrating on ourselves practising in the Supreme Court and the high court making big money. Look at the number of cars that we have. The latest imported cars are here in the parking lot and therefore I think it is necessary that we know how to ensure a proper compensation for them," Venugopal said.

He also pointed out that the Delhi high court has a welfare fund but there is a case pending related to embezzlement and diversion of funds.

"I don't know how lawyers can do that to themselves, if they have a heart and a conscious," he asked.

On the issue of overcrowding, Venugopal said it has become difficult for him owing to his old age to cut across the crowd and reach before the bench inside the courtroom in the apex court.

"I am sure Chief Justice Ranjan Gogoi will find a solution to what I consider to be an impractical problem," he said.

The SCBA president said one of the major concerns for the judiciary was the pendency of cases.

"I am so glad Justice Gogoi had made a statement before taking oath (as the CJI) that he has a plan for it," he said. 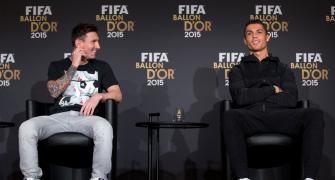 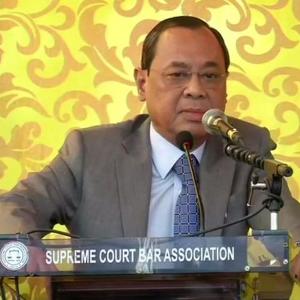