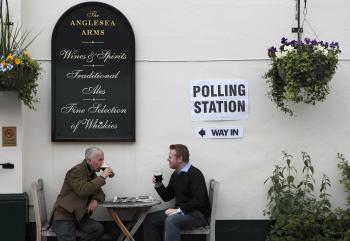 According to the BBC/Sky/ITV News exit polls, Conservatives would win 307 seats, Labour 255, Liberal Democrats 59 and others 29 in the 649-member House of Commons for which voting concluded last night.

As per the polls, Britain demanded change as voters took to the polls in massive numbers to end Labour's 13 years in power.

Turnout was on course to be the highest since Conservative leader John Major's shock victory in 1992.

At the end of the most tumultuous election race for a generation, it was clear that Labour had been decisively rejected.

Exit polls indicated Cameron on course to be prime minister, but 19 seats short of a Commons majority, meaning Britain faces the uncertainty of a hung Parliament.

The Tory leader may be able to form a viable government with the support of Unionist MPs from Northern Ireland.
But the result was so close - with signs that the Liberal Democrats surge may have won them no extra seats - that the final outcome may not be clear until later today.

The huge turnout was being seen as a response to what has been dubbed the "rotten Parliament", mired in the expenses scandal and an exhausted government that has left public finances in unprecedented turmoil.

If the actual result is similar to the outcome of the exit poll, the Labour party will lose power after a record 13 years in office.

The BBC says Conservative leader David Cameron might find that winning one or two seats in Northern Ireland and forming a deal with the Democratic Unionist Party might be enough to give him a majority, making him Britain's next prime minister.

The exit poll -- the BBC report says -- anticipates that the Labour Party has been more successful at holding on to its vote in seats in Scotland and Wales in seats where there is a large ethnic minority population and where there is an incumbent Labour MP standing again.

The exit poll, conducted at 130 polling stations and which surveyed more than 20,000 voters, suggests Britain is on course for its first "hung parliament" since 1974.

Elections were held yesterday in 649 constituencies across the UK.

Image:  Men drink at a pub being used as a polling station in London.