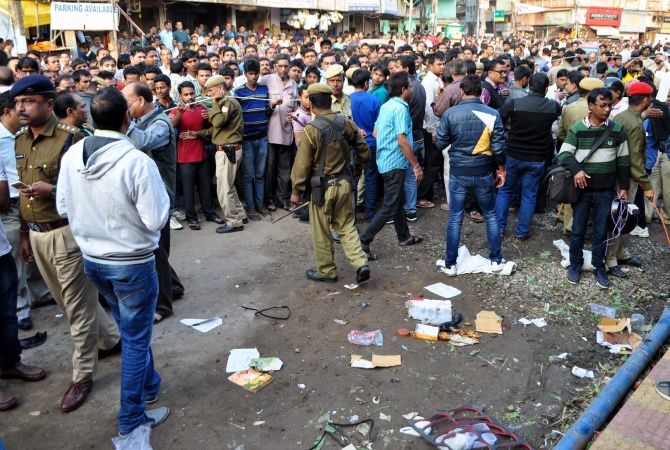 Four persons, including a six-year-old girl, were injured in two explosions that rocked he city's commercial hub Fancy Bazaar on Saturday.

"The explosions have not been caused by an improvised explosive device or a grenade and the nature indicates to be a low intensity one with the possibility of fire crackers being used not ruled out," Guwahati Police Commissioner Mukesh Agarwal told reporters.

A minor boy of about 14-15 years age was seen at the spot near a garbage dump in front of a sweet shop in the Old Jail Road of Fancy Bazar area this afternoon around 3:30 pm immediately after that the explosions took place with the boy fleeing from the spot, he said.

The boy was being questioned, Agarwala added. Kamrup (Metro) Deputy Commissioner M Angamuthu, who also rushed to the spot, also ruled out the possibility of a grenade blast.

Four persons, including a six-year old girl, were injured in the blasts and were admitted to the nearby MahendraMohanChoudhuryHospital and were stated out of danger.

The Bharatiya Janata Party’s Guwahati Member of Parliament who rushed to the spot, blamed the Congress government of "failing" to ensure safety and security of lives and property to the common people.

"Chief Minister Tarun Gogoi holds the home portfolio and it is his duty to strengthen the police and security network in the state," she said.

The security scenario in the state should be reviewed following the recent attack on two businessmen in Namrup in Upper Assam and today's explosions in the state's commercial and business hub, she added.

Meanwhile, security in the Fancy Bazaar area, which also witnessed a devastating fire on Diwali night, has been strengthened with additional police forces deployed in the area.