Republican presidential nominee Donald Trump on Wednesday favored having friendly, if not a strong, relationship with Russia to defeat the dreaded Islamic State militant group but said that he would not compromise on America's national security in this partnership. 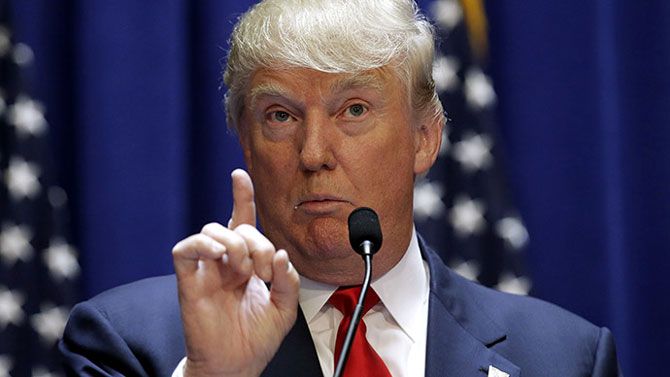 Trump at an impromptu news conference in Miami, Florida responding to a question, said that Russians probably have the missing 33,000 emails of Clinton.

"Russia, if you're listening, I hope you're able to find the 30,000 e-mails that are missing. I think you will probably be rewarded mightily by our press. Let's see if that happens,"
Trump said in yet another controversial remarks, which he has been known for during his entire election cycle.

"This has to be the first time that a major presidential candidate has actively encouraged a foreign power to conduct espionage against his political opponent," said Jake Sullivan,
a senior policy advisor to Hillary for America.

"That's not hyperbole, those are just the facts. This has gone from being a matter of curiosity, and a matter of politics, to being a national security issue," Sullivan said in a statement.

Trump said the hacking into the server of the Democratic National Committee could be either by Russia or China, or someone else.

Trump said he would release his complete tax returns once their audit is complete.

Trump said that he would not compromise on American national security, but would go along well with the Russian President Vladimir Putin and other global leaders.

"I would treat Vladimir Putin firmly but there's nothing that I can think of that I'd rather do than have Russia friendly as opposed to the way they are right now so that we can go and knock out ISIS together with other people and with other countries," he said.

Trump refuted allegations that Putin is helping him out in this presidential elections, by first hacking into their emails and releasing them.

"I have nothing to do with Putin. I've never spoken to him. I don't know anything about him other than he will respect me. He doesn't respect our president. And if it is Russia -- which it's probably not, nobody knows who it is -- but if it is Russia, it's really bad for a different reason, because it shows how little respect they have for our country, when they would hack into a major party and get everything," he said.

"But it would be interesting to see -- I will tell you this -- Russia, if you're listening, I hope you're able to find the 30,000 e-mails that are missing. I think you will probably be rewarded mightily by our press. Let's see if that happens. That'll be next," Trump said.