Trinamool Congress, a key constituent of the United Progressive Alliance, on Thursday opposed the hike in diesel prices, saying it was not consulted about the step and demanded its rollback.

"We were not consulted for this and we are unhappy with the decision to hike diesel prices," said Railway Minister Mukul Roy.

Roy's reaction came after a decision of the Cabinet Committee on Political Affairs. Roy is a member of the CCPA but he did not attend Thursday's meeting.

He said the party is opposed to any price rise because it is not in the interest of the common man. "This sort of decision will hit the common man," Roy said.

His party colleague Kunal Ghosh was more upfront in attacking the government and demanded an immediate rollback.

"We are shocked to hear this. We are not part of the decision. The government should roll back the decision," Ghosh said.

Ghosh added, "We were not informed about the decision (diesel hike) by the government,  we came to know about it from the media." 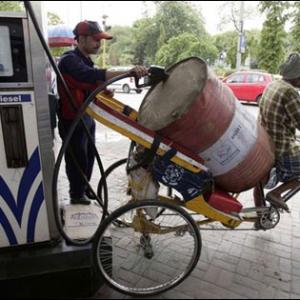