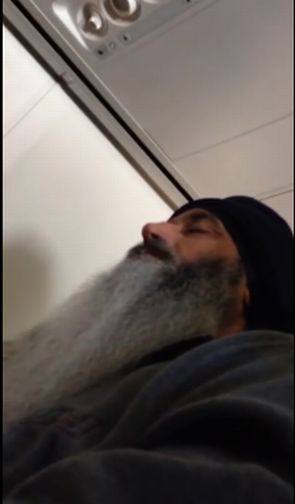 An elderly Sikh man in the United States was filmed while sleeping on a flight by a co-passenger who posted the video online with a title 'Would You Feel Safe' and a description that says 'flying with bin laden'.

Darshan Singh, who was travelling on a JetBlue flight from New York to California in November, didn't exchange words with the man sitting next to him and was surprised when he saw his video online, Sikh advocacy group United Sikhs said.

The 39-second video of Singh, a California resident, has been viewed over 83,000 times since it was posted on YouTube on December 9.

Singh's 20-year-old daughter informed the group that a video of her father sleeping on the JetBlue flight, recorded by the man sitting next to him, was circulating on the internet, said Manwinder Singh, director, United Sikhs.

"This act of ignorance is the latest in a series of anti-Sikh hostility in the days following the horrific shooting in San Bernardino, California on December 2," he said.

On December 6, a gurudwara was vandalised with anti-Islamic State graffiti. On the same day, four Sikh men were stopped from entering a football game because of their turbans.

Hundreds of people have commented on the video, most of them condemning the person who filmed it, with more than 1,170 people hitting the 'dislike' button.

"Sikhs are known to be fearless warriors and ones who are willing to give up their lives for others, so you should feel safe," one person commented on the video.

The Sikh group is trying to get the video removed from YouTube.

"Incidents like this are shocking. No one, Sikh, Muslim, or otherwise should be afraid to travel. These types of incidents only weaken the fabric of our nation," said Jaspreet Kaur, staff attorney of the group.

"It's everyone's responsibility to be aware of the acts of ignorance around them and to report them when they see them. Only then can we unify ourselves against hate, ignorance and discrimination," she added.

Sikh-Americans have long been the target of racially motivated violence and discrimination in the US, especially after the 9/11 terror attacks.

In September, a Sikh-American was viciously assaulted in a suburb outside of Chicago after being called 'Bin Laden'. In 2014, Sandeep Singh, a Sikh American in New York City, was run over and dragged 30 feet after being called a 'terrorist'.

US-based Sikhs have launched a national campaign to tackle the growing wrong perceptions about their community post the 9/11 terror attacks.