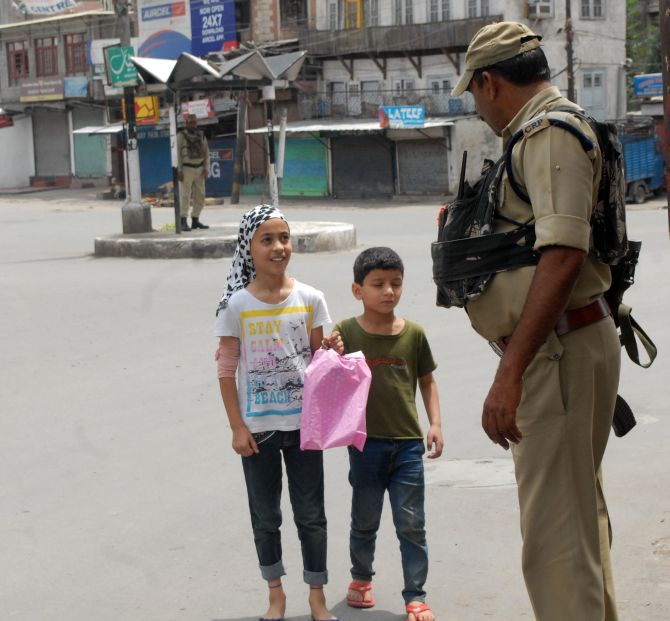 IMAGE: A security personnel questions children who went out on a deserted street during curfew in Srinagar on Sunday. Photograph: Umar Ganie

The death toll in the ongoing unrest in Kashmir rose to 49 on Sunday as one of the injured persons succumbed at a hospital in Srinagar even as curfew in some parts and restrictions in rest of the Valley continued as a precautionary measure.

Ishfaq Ahmad Dar, 17, who was injured during clashes in Sopore town of north Kashmir’s Baramulla district on July 23, succumbed at SKIMS Hospital Soura on Sunday morning, a police official said.

Dar had suffered critical injuries during clashes that erupted a day after the killing of Hizbul Mujahideen commander Burhan Wani in an encounter on July 8.

“Curfew is in place only in five police station areas of Srinagar city -- Nowhatta, Khanyar, Batamaloo, Safakadal and Maharajgunj,” he said.

Mobile Internet services continued to remain snapped in the Valley where the postpaid mobile services have been restored across all networks.

Meanwhile, normal life remained paralysed elsewhere in the Valley for the 23rd consecutive day today in view of the strike call given by the separatist camp.

The separatist camp has extended the shutdown call in Kashmir till August 5, calling for a march to Hazratbal shrine on Friday. 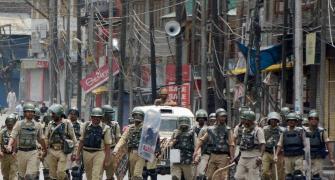