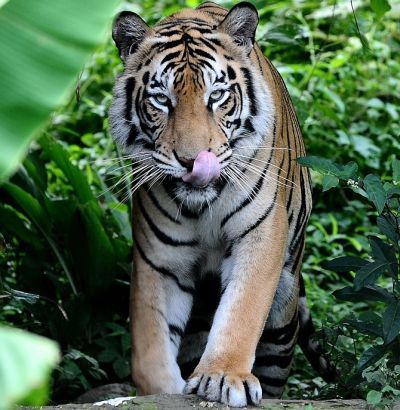 A senior Madhya Pradesh minister has sought a law that allows people to domesticate or keep big cats like lions and tigers as pets, for their conservation.

Animal Husbandry, Horticulture and Food Processing Minister Kusum Mehdele, in a proposal sent to the state's forest department, has cited legal provisions in some African and South-East Asian countries like Thailand which have helped bring about an increase in the population of the big cats.

Noting that there are various projects in the country for conservation of tigers, the minister, however, said that although crores of rupees have been spent on these projects, there has been no surprising increase in tiger numbers.

In Thailand and some other nations, there is a legal recognition to people for keeping tigers and lions as pets, she said, adding the number of such animals is increasing in a surprising way in these countries.

If such a possibility can be thought over, then necessary action should be undertaken and guidelines passed on, she said in the proposal sent to state Forest Minister Gaurishankar Shejwar in September last year.

Following suggestions from the minister, Madhya Pradesh Principal Chief Conservator of Forests Narendra Kumar has written to the National Tiger Conservation Authority (NTCA) and Wildlife Institute of India (WII) seeking their comments on the proposal.

"Kindly give your suggestion or comments in this regard so that the minister can be informed about it," Kumar said in the letter.

The copy of the note sheet carrying the minister's suggestion and Kumar's letter were accessed by Bhopal-based wildlife activist Ajay Dubey following an RTI appeal filed by him.

Mehdele could not be contacted for comments despited repeated attempts by PTI.

"It is surprising that such a bizarre suggestion could be made by senior minister Mehdele. She hails from the Panna region of the state, which is known for its tiger population. I denounce such a proposal and request the central government not to give its permission for domesticating the tiger," Dubey said.

Six tiger reserves in Madhya Pradesh -- Bandhavgarh, Kanha, Panna, Bori-Satpura, Sanjay-Dubri and Pench -- have as many as 257 big cats.