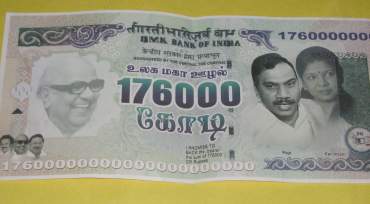 Will Thirunchendur once again elect a representative of the party that will eventually rule Tamil Nadu? A Ganesh Nadar tries to find out if the temple town will retain its winning streak this time

Thirunchendur is one of the top pilgrimage destinations in Tamil Nadu. It is one of the six abodes of Lord Muruga, the second son of Lord Shiva.

The voters of Thiruchendur constituency strongly believe that the party which wins from this holy town ends up forming the state government. But in the 2006 assembly polls, this belief was proved wrong, albeit temporarily. That year, Anitha Radhakrishnan of the All India Anna Dravida Munnetra Kazhagam won the assembly election from here, but the Dravida Munnetra Kazhagam went on to form the government.

Radhakrishnan was later expelled from the party and he subsequently resigned from his seat.

Ironically, he then joined the DMK, contested a by-election and won. So the ruling party once again had Thiruchendur constituency in its kitty and the locals were happy about their elected representative being part of the government.

Radhakrishnan is once again contesting as the DMK candidate against R Manoharan from the AIADMK. There are 15 other candidates in the fray but they don't really stand a chance.

Most constituents here as well as both the candidates belong to the Nadar community.

A few months ago, there was a confrontation between members of DMK's ally Viduthalai Chiruthai Katchi and some local businessmen. Some people were disappointed with the fact that Radhakrishnan could not work out a compromise between the two groups, and he may lose a section of the businessmen's votes due to that spat.

Another considerable voter base is in Kayalpattinam, a predominantly Muslim town that has traditionally supported the DMK.

The Manithaneyar Makkal Katchi, a party for the minority community, has teamed up with the AIADMK in this election. The party may sway a few voters in Kayalpattinam towards the AIADMK-lef combine.

Radhakrishnan's strongest USP is that he is well-known throughout the constituency. He pays a visit to all the marriages and other social functions in his constituency. He is always available to the people who want to meet him; his accessibility to his voters is his biggest wining factor.

On the other hand, the AIADMK candidate is not as well known locally.

Sekar, a pandal contractor in Ammanpuram, says, "Radhakrishnan will win because everyone knows him. We can meet him whenever we go to his house. But people were expecting money during these elections and they are disappointed. The Election Commission has really scared everyone. But he will win even without any distribution of money".

A young boy, who was going door-to-door distributing DMK party notices, was asked by a lady, "Last time you gave us money, where is the money now?"

But this bit of information failed to silence the lady.

"If you don't give me money, I am going to vote for the AIADMK," she warned.

Says a local banker, "Radhakrishnan will get less votes in Thiruchendur town because of that fracas a few months ago. But he has nothing to worry about as he is very popular in the rural areas, so he will surely win".

The banker also mentioned that the people had expected the political parties to distribute a lot of money and they had been disappointed when nothing like that happened this time.

According to a local juice shop owner, the ruling DMK will lose the state polls as the people wanted a change in leadership. A fellow shopkeeper echoed his views.

Since there are barely any wall graffiti, posters or banners visible during this year's campaign, these party notices are turning out to be the main canvassing tools.

The DMK is distributing notices that highlight the achievements of their government in the last five years and their promises for the next five.

It is a not-so-subtle reminder of the massive 2G scam allegedly perpetrated by DMK leader and former telecom minister A Raja.

Vehicles, with their loud speakers blaring, urge people to vote for the respective political parties.

In Thiruchendur, it seems the DMK candidate is going to win by a small margin. 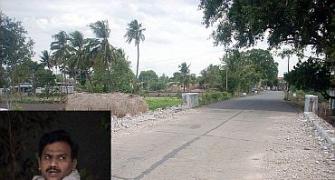 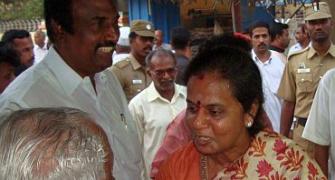 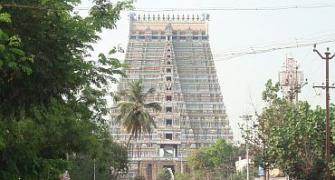 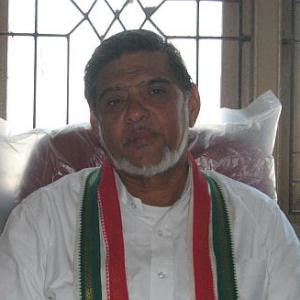 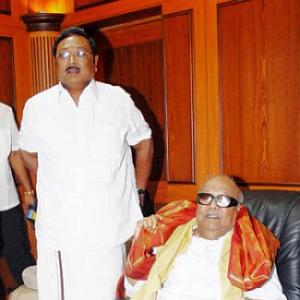