News
Business
Movies
Sports
Cricket
Get Ahead
Money Tips
Shopping
Sign in  |  Create a Rediffmail account
Rediff.com  » News » This is the first time Headley has spoken before a judge'

This is the first time Headley has spoken before a judge'

'Headley's confirmation of certain aspects of the conspiracy, its planning and what his role was will definitely matter.' 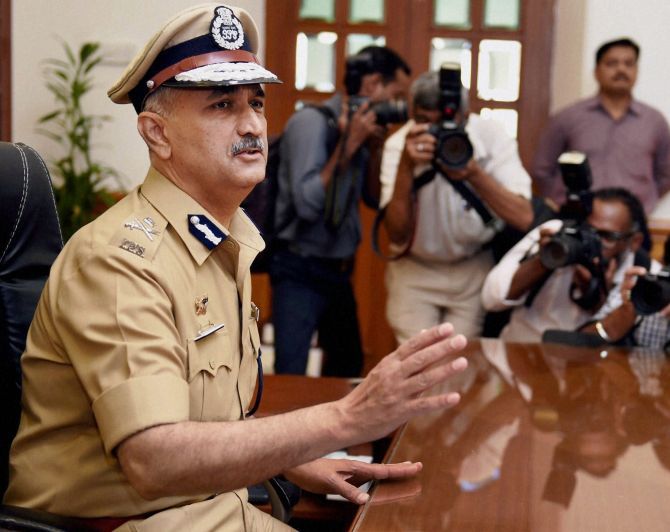 A full transcript of the interview, kind courtesy CNN-IBN:

How far have we come as far as the 26/11 investigation?

As far as the investigation is concerned, I think the old part is over and the logical conclusions have gone through.

But you would have noticed recently that we had the deposition of David Headley, who was a part of the conspiracy. I would rate it as important because this is for the first time Headley has spoken before a judicial authority.

Headley's confirmation of certain aspects of the conspiracy, its planning and what his role in the larger whole was will definitely matter.

What was put forward to him, I think, has been said on record.

It is quite likely that he had certain other things in mind when he came here and he hasn't disclosed those plans fully, but the investigations been done by the investigative agency and others have revealed a number of things and have shown various links of his presence here and of how he went about it.

Does Headley's unwillingness to identify Abu Jundal hamper the investigation in any way?

I think what he has said so far is sufficient because he has identified other actors who are a part and are aware and who probably participated during the attacks. So I think that has definitely helped in putting forward our case.

As I said earlier -- Headley's testifying before a judicial authority carries more weight.

I am not aware of the earlier inputs, they were probably given directly to the Government of India in New Delhi, but I can definitely say that during an investigation the Central Bureau of Investigation was extremely helpful and helping us carry out certain technical tests among other things.

How do you intend to meet the challenges facing the police force?

As you very rightly said the police of Mumbai has enormous number of challenges and you have seen that over the last 15, 20 years, there have been a number of issues affecting the city and also anything that happens else where in the world it does sort of leave an imprint on Mumbai.

So the most important part is that the police always have to be alert and ready to meet any situation so on those aspects we are trying our best to make sure that the systems that are in place are ready to meet our challenges .

On combating specific threats to the city with special regards to terror situation.

In the sense that challenges in Mumbai come from all directions -- land, sea and air -- so those aspects over the year have taken well care of in terms of close coordination and cooperation between the marine wing of the Mumbai police, the Coast Guard and the navy.

On the other side we have raised counter terrorist units which are based in Mumbai and there is a hub of National Security Guards available to Mumbai or Maharashtra at a very short notice.

So in terms of availability of combat forces there is definitely an upgradation and it is there and working well.

How do you intend to deal with the various threat alerts directed towards the city?

Whatever threats that come in are very closely analysed. We try and work out if we have any similar situation on the ground.

We take the assistance of other people who are trying to help us in terms of central agencies or other people or other institutions like the ATS and the state intelligence department.

So we try and narrow down the ground to get a feedback whether there is some activity in the area. So there is a continuous process and as that goes on we try to see if that could be localised and isolated and then take further action.

We take such threats extremely seriously and immediate instructions are issued. Our DCPs (deputy commissioners of police) are constantly on their job and our Special Branch is also working.

Now we have to look for other indicators that tell us how and when and what would happen. So the process is a painstaking one, but we are doing it.

How are the police trying to combat the continued radicalistion of youngsters in the city?

As it has been noticed there have been definite instances of young boys being attracted to a particular ideology, but I would try to mention here that the most important factor is that the community has come forward.

They are the ones that are telling the youngsters not to get attracted or be swayed by with something that is not the real thing.

I have had meetings with two organisations where a large number of people from the Muslim community condemned this kind of activity.

The Muslim community is doing their best to spread the word around to the youngsters not to follow the wrong path.

I would say very emphatically that taking the help of the community is very important so that we are in the position to positively influence young minds.

I think the government of Maharashtra is already working on it. I am told that it's at the final stage where it would have been a coordinated approach by various departments.

The social welfare department, the education department and others will have to work in unison to see that it's a joint effort to reach out to the disinformed youngsters.