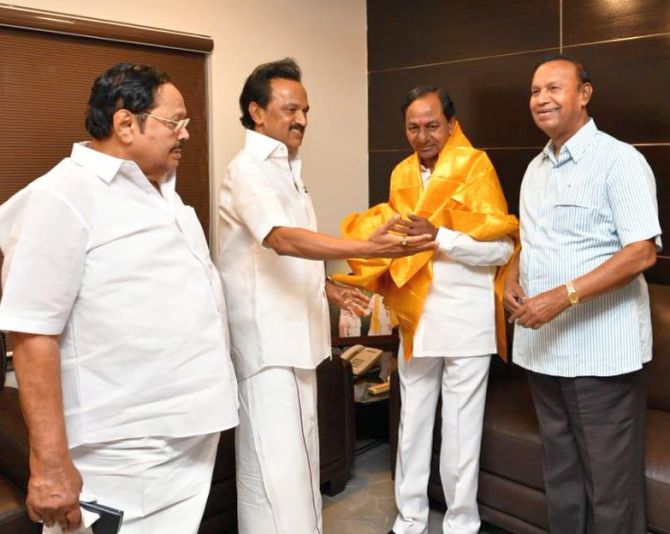 Continuing his efforts to bring together regional parties, Rao called on Stalin at his residence here and discussed with him his proposal for a federal front, DMK sources said.

In the meeting that went beyond an hour, Stalin conveyed to Rao that his party was in a pre-poll alliance with the Congress and he had also pitched the name of Rahul Gandhi for the office of the prime minister.

Rao, who had days ago called on his Kerala counterpart Pinarayi Vijayan, exuded confidence in the deliberations that regional parties would emerge as a powerful force with a significant number of seats and neither the Congress, nor the Bharatiya Janata Party would have adequate numbers to form a government.

In such an eventuality, the TRS chief told the DMK president that a government could be propped up by the regional parties with the support of 'national parties', a reference perceived to include the Left parties as well.

Possible 'post poll scenarios' that may merge and how a federal front could help regional parties and 'southern states', were put forth by Rao, sources added.

To this,the DMK side,which was also represented by senior leaders Duraimurugan and T R Baalu, felt the situation was conducive only for a Congress-led government at the Centre.

Also, the Dravidian party pointed out that toying with the idea for a regime steered by regional outfits at the Centre may not work in view of divergent state specific positions of some parties.

The TRS is opposed to both Congress and Telugu Desam Party in Telangana. While Rao did not meet waiting reporters, DMK said the meeting was only a 'courtesy', call.

Rao had in April 2018 called on Stalin and then DMK chief M Karunanidhi in Chennai.

Earlier in the day, he offered prayers at the ancient Sri Ranganathaswamy temple at Srirangam in Tiruchirappalli.

On May 10 he visited the Sri Ramanathaswamy Temple in Rameswaram after going to Kanyakumari.

Tamil Nadu Congress Committee president K S Alagiri downplayed the meeting between the two leaders and asked journalists 'why accord importance to the meeting...in India a third front is not possible and not practicable; State parties from Kasmir to Kanyakumari know this very well'.

BJP Tamil Nadu unit president Tamilisai Soundararajan wondered what was Stalin's 'hesitation' in his meeting with Rao to assert that he only supported Rahul Gandhi.

Taking a jibe at Stalin, she said the DMK top leader had faced a similar hesitation when he was in West Bengal to take part in a rally held by Mamata Banerjee.

She alleged the DMK had a reputation of changing colours, adding there was no transparency. 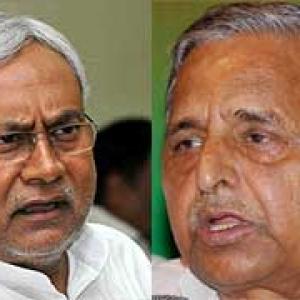 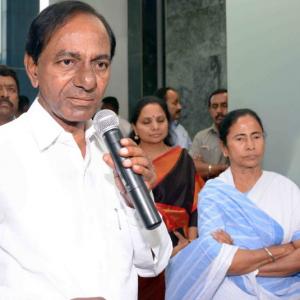