News
Business
Movies
Sports
Cricket
Get Ahead
Money Tips
Shopping
Sign in  |  Create a Rediffmail account
Rediff.com  » News » There should be no political interference in 2G case: Karuna

There should be no political interference in 2G case: Karuna

With the opposition gunning for Home Minister P Chidambaram in connection with the controversial finance ministry note on 2G spectrum allocation, Dravida Munnettra Kazhagam president M Karunanidhi on Monday said there should be no political interference in the case.

Responding to reporters' queries Chennai on the opposition demand for Chidambaram's resignation, the 88-year-old DMK patriarch said, "It is their opinion. My opinion is there should be no political interference in this case."

In an apparent reference to the statement by Telecom Minister Kapil Sibal on zero losses, he said, "Initially, the loss estimates (due to spectrum pricing) were put at Rs 1.76 lakh crore (by Comptroller and Auditor General). Then they (CBI) said it was Rs 30,000 crore. Then they officially declared there was no (zero) loss."

Asked if Chidambaram was connected in "some way" in the scam which has come to haunt the Congress-led United Progressive Alliance II government at the Centre, he said Prime Minister Manmohan Singh himself had reposed his faith in the home minister.

On Chidambaram being the third minister from the state after A Raja and Dayanidhi Maran to have faced controversy on 2G spectrum allocation, Karunanidhi said he did not accept levelling charges against someone "to oust him from his post".

"Who are we to ask a minister from Tamil Nadu to step down?"

He also took a dig at the media when he said that it should "not deliver verdict" as the courts were looking into the matter.

Asked if he "regretted" the UPA government not defending Raja and Maran like they were doing for Chidambaram, Karunanidhi said he did not use such incidents in politics to rejoice or regret.

Last week, a finance ministry document submitted before the Supreme Court had said the telecom ministry could have gone in for auction of 2G spectrum licenses had then Finance Minister Chidambaram insisted on it.

Karunanidhi, whose daughter Kanimozhi, MP, is in jail in connection with funds transfer from a 2G scam accused company to Kalaignar TV in which she holds shares, said all efforts were on to secure bail for her.

On party MP T R Baalu calling on Congress President Sonia Gandhi after her return from US for treatment for an undisclosed ailment, he insisted that the former had gone to enquire about her health since she had undergone an operation.

Holding that he is someone who respects alliance partners, Karunanidhi said he would also call on the UPA chairperson, once the court case was over.
Source: PTI© Copyright 2021 PTI. All rights reserved. Republication or redistribution of PTI content, including by framing or similar means, is expressly prohibited without the prior written consent.
Related News: United Progressive Alliance, Karunanidhi, Dravida Munnettra Kazhagam, Sonia Gandhi, Dayanidhi Maran
SHARE THIS STORY
Print this article
'If Cong didn't want to give Telangana why did PC promise'
Vote bank politics over 'clemency' 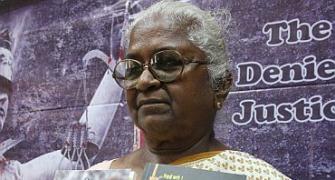 My son is innocent, says mother of Rajiv 'assassin'

Did Chidambaram offer to quit during his meeting with Sonia?