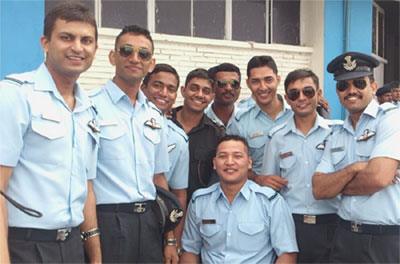 Adapting to disability is perhaps one of the greatest triumphs of human evolution.

Flight Cadet Herojit Rajkumar Singh is a living example of it, notes M P Anil Kumar -- our incredible contributor, who passed into the ages on May 20, 2014.

Not long ago, donning the Indian Air Force uniform was a mere flight of fancy for Flight Cadet Herojit Rajkumar Singh (nicknamed Hero, so apparent!).

Hailing from the far reaches of our country, this lad forsook BTech (computer technology) to join the National Defence Academy (Pune) to chase his cherished desire of blazing across the horizon in a fighter aircraft.

Left: Flight Lieutenant Herojit Rajkumar Singh after he was commissioned.

And blaze he did at NDA -- inter alia, appointed Battalion Cadet Adjutant, he was awarded the Academy Blazer for swimming, Sports Insignia for excellence in sports and won the silver medal for the best cadet in physical training (119 course).

Having stood third in flying through the basic stage at Air Force Academy (Hyderabad), he proceeded to the Fighter Training Wing (Hakimpet, Secunderabad) to undergo the second stage of flying training.

On August 22, 2011, an emergency during a Kiran solo sortie forced him to eject. During the short, parachute-assisted descent, he realised that he could not control his legs. Luckily, he didn't pick up landing injuries.

Unluckily, the force of ejection snapped his lumbar spine.

The consequence was life-numbing: The spinal cord injury he sustained had paralysed him waist down. A new word -- paraplegia -- barged into his vocabulary.

He listened to the medical officer at the Military Hospital, Kirkee (Pune), with rapt, hopeful ears.

The prognosis of lifelong wheelchair mobility obviously deflated him. Then the killer kick landed: he would be invalided out in due course.

'Sir, I know I can't be a pilot, but my upper body is okay, so can't I serve the IAF in a non-flying capacity?'

'You are a flight cadet son, four months short of commissioning. A nobody. So, off to Civvy Street, I am afraid that is the letter of the rule.'

He heard a big bang; not only his ambition to stand out as an outstanding flyer, but even the secondary dream of serving the IAF in another capacity too had crashed.

A solitary thought tormented him: Had I been untouched by this catastrophe, I would have been commissioned as a fighter pilot along with my course mates, which would have been an occasion to rejoice for not just my parents and siblings but for my home village Singjamei in Manipur as well.

The youngest of the brood of five, he knew how strenuous it would be for a paraplegic to bounce back, to eke out in the dog-eat-dog 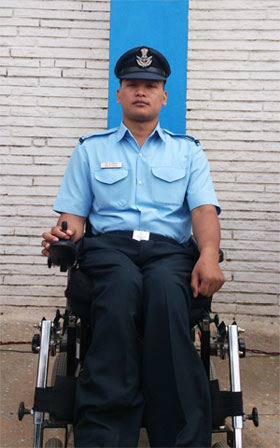 environment; naturally his worst fear was that if he flunked, he might turn into a burden to his aged parents, and he dreaded to even contemplate becoming a liability to anyone.

Right: The IAF and Herojit Rajkumar Singh have made history

Very mindful of the onus, he began cramming for CAT and sundry tests, but even while poring over the study material, his monomaniacal mind drifted into its habitual reverie -- a rebirth: A career in the IAF in a non-flying capacity. He knew he had nothing to lose by despatching an entreaty to the air chief for retention in the service.

As he began conditioning his mind to a life outside the IAF, last August, a godsend landed on his lap -- an opportunity to present his case in person to Air Chief Marshal N A K Browne, Chief of the Air Staff.

The air chief felt the plight merited his intervention as this extraordinary instance involved a flying mishap, ejection injury and a youngster with tip-top track record.

He told Hero that the IAF had no problem in embracing him but since he was a flight cadet, the ministry of defence (MoD) would be the final arbiter of his fate. Hero sighed, his hope took wing, but refrained from exulting as he was aware that a 'stickler for rules' was at the helm of the ministry.

And the path was paved with stumbling-blocks. His file began the customary back-and-forth between fine-tooth comb-armed MoD and air headquarters, the latter having to respond to the clarifications sought by the former. It redounds to the credit of the air chief that he bypassed the normally naysaying bureaucrats by reasoning with the defence minister directly.

The defence minister signed and stamped the imprimatur of Hero's retention in the third week of last December.

Meanwhile, the brass in air headquarters had deliberated and concluded that the accounts branch would be the most appropriate line for Hero (usually an NDA alumnus is not given this branch).

Air HQ worked overtime to ensure that the formalities and paperwork were completed and he was there at the Air Force Academy in the first week of January, in time for the fresh course.

Today, the IAF and Flying Officer Herojit Rajkumar Singh have made history. Hero is perhaps the first wheelchair-bound cadet to be commissioned by any of the armed forces in the world.

Hero's commissioning is not a surprise for the IAF has been a pioneer, and boasts a notable history of compassion.

Given the nature of their profession, soldiers, sailors and airmen are prone to physical injuries, the severest form being spinal cord injury. This could mean a life of disability. While the practice was to discharge the spinal-cord-injured servicemen, in the early 1990s, realising the worth of his experience and utility to the service, the IAF reversed the trend and retained Wing Commander Ashok Limaye, a paraplegic, in the service.

The Indian Army dittoed later by absorbing Major Pallav Desai and Lieutenant Colonel S K Razdan, thus commencing the employment and rehab of wheelchair-bound officers within the services itself. (And the 15-odd officers retained hitherto have been worth their salt. For example, S K Razdan served with distinction and retired as Major General last October.)

Mind you, this IAF initiative began years before the Parliament 'ayed' its approval to the Persons with Disabilities (Equal Opportunities, Protection of Rights and Full Participation) Act, 1995, an Act that bestowed equal opportunities on the disabled employees in Centre and all state governments.

Even though the armed forces need to maintain a fit profile, not every soldier needs to be on the front; the organisation has to deploy hundreds in the offices. That is, instead of throwing disabled soldiers to the wolves, they can be retrained for sedentary tasks, especially for the computer-driven workplace, and be made useful cogs in the organisation.

Some of our northeastern states have been buffeted by militant turbulence. Certain sections have looked askance at the army troops deployed there to restore order. Methinks their larger numbers will help them understand the military better.

Maybe Hero's story will inspire more and more youths from our northeast to join the armed forces as officers.

M P Anil Kumar was a dashing MiG-21 pilot when a road accident left him paralysed below the neck.

He lived in the military's Paraplegic Rehabilitation Centre in Pune and has become an inspiration to many in the manner in which he has picked up the threads of his life.

Please read: The Pilot Who Is A Fighter 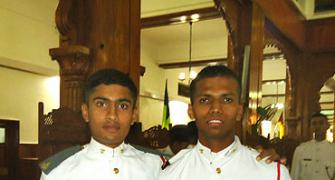 A soldier who was the bravest of the brave