News
Business
Movies
Sports
Cricket
Get Ahead
Money Tips
Shopping
Sign in  |  Create a Rediffmail account
Rediff.com  » News » Tharoor has a tough fight on his hands

Tharoor has a tough fight on his hands

Shobha Warrier reports from Thiruvananthapuram where a former UN diplomat is battling a former governor for the Lok Sabha seat. 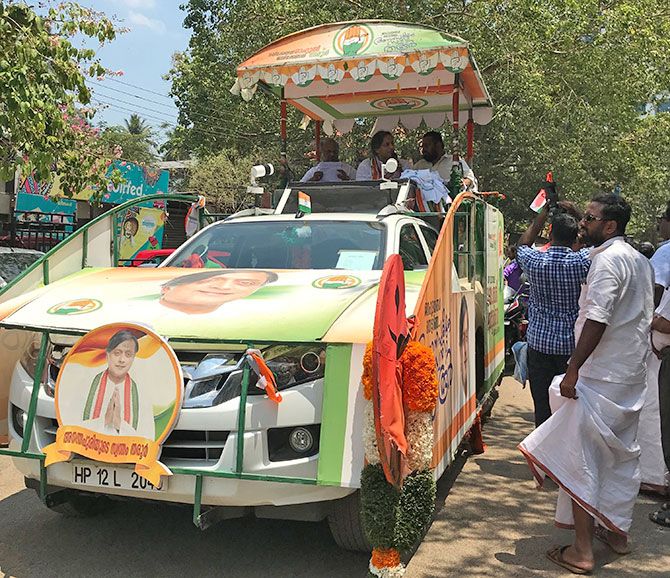 When Shashi Tharoor was fielded as the Congress candidate from the capital of Kerala in 2009, soon after he returned to India after a long tenure at the United Nations, there were both subtle and loud protests from local Congressmen who had been toiling hard in Thiruvanthapuram for years.

But the urban residents of Thiruvananthapuram were so enamoured with the suave handsome diplomat that he won the 2009 Lok Sabha election by 100,000 votes.

Tharoor did not disappoint his voters in his first term, installing high-mast lamps at various junctions and starting many libraries. Of course, controversies swirled around him -- over his tweets, his involvement with the Kochi IPL team, his high-profile life as a central minister.

The situation changed with the death of his wife Sunanda Pushkar. Affection and pride for the MP turned to suspicion and scepticism.

The 2014 election was not an easy ride for Tharoor. He had to fight a tough battle against Bharatiya Janata Party veteran O Rajagopal, a minister of state in the Atal Bihari Vajpayee government.

For most of the counting in May 2014, Tharoor trailed Rajagopal. The BJP had even arranged a press conference to celebrate the party's first Lok Sabha victory from Kerala. But the last 30 minutes of counting changed the outcome.

Five years later, in 2019, the political scene in Kerala has changed considerably. It is no longer a direct, traditional, fight between the Congress-led United Democratic Front and the Communist of India-Marxist-led Left Democratic Front.

BJP-led National Democratic Alliance nominees are reported to be giving LDF and UDF candidates a strong fight in many constituencies.

For the first time, Kerala will witness three-cornered contests in all its 20 Lok Sabha seats.

The Left and Congress have joined hands in many states, including neighbouring Tamil Nadu, for this election, but their candidates will contest the Lok Sabha against each other in Kerala.

In Thiruvananthapuram, even at 8 am, the temperature is close to 30. Kerala has not witnessed a recent summer like this. Months after the unprecedented floods, where more than 600 people died, around 20 people have already died of heat stroke in the state and a heat wave warning is still in place.

I wait outside the Aruvippuram Siva temple established by Sree Narayana Guru, the early 20th century monk and social reformer, waiting for BJP candidate Kummanam Rajasekharan to start the day's campaign after praying at the temple.

The temple is an important part in Kerala's history. When Sree Narayana Guru -- who belonged to the backward Ezhava community -- consecrated the Siva temple in 1888, he became the first non-Brahmin to do so.

While most politicians become governors and enjoy a retired life, Kummanam -- as he is known to Malayalees and Rajettan to BJP and Rashtriya Swayamsevak Sangh workers -- resigned as governor of Mizoram and jumped into the heat and dust of the election.

"It is going to a very tough fight," tea shop owner Babu tells me, even as he distributes cups of steaming hot tea to BJP activists. "Kummanam has a slight advantage because many people here feel Tharoor was hardly seen in this term."

"Where was he during the floods? Where was he when cyclone Ockhi hit the coast? All these politicians become actors during the elections, but people are now intelligent enough to understand what's a genuine gesture and what's fake," Babu adds.

Kummanam, he concedes, would perhaps not match Tharoor's erudition. "It is true that Tharoor will make a mark in Delhi and the rest of the world with his knowledge and presence, but we need a person who would be here for us. Kummanam is a simple man like most of us."

It is this image of Kummanam that the BJP is trying to project.

The loudspeaker mounted on the jeep in front of the convoy blares, "This is our man, your man, a man in a simple dhoti and shirt, a man who leads a very simple life like all of us. Vote for our Kummanam Rajasekharan, our own Rajettan, the man who left the luxuries of the governor's bungalow to serve the people of Thiruvananthapuram..." IMAGE: The Kummanam convoy rolls on.

The auto driver gets excited when I tell him I want to go where Tharoor is to address a meeting. He points to the many pictures of Hindu gods on his dashboard and proclaims, "I am a Hindu, I believe in God and I go to temples every day. That does not mean I support the BJP. For generations, we have been supporting the Congress and I will continue to do so."

"I am true Tharoor fan," the auto driver declares. "It is the good fortune of the people of Thiruvananthapuram that we have a great man like him as our MP. We can proudly tell the entire world that our MP can stand in front of all of them as an equal, if not better than them. I want him to win this time too. I agree it is going to be a tough fight this time."

He is sure that Sabarimala will be a major issue in Kerala this election. "The way the Pinarayi (Vijayan, chief minister) government handled the issue was abominable," he adds.

"I was a bit disappointed with the way my party reacted. I would have preferred them taking a firm stand in support of the believers. But all of us want peace in society and the BJP is a violent party like the Left unlike the Congress; we have always stood for peace and harmony."

As Tharoor's campaign crew is more than an hour behind schedule, a man jumps out of a jeep with a Congress flag and starts speaking. "Can any of their candidates match Tharoor?" the man thunders.

"What the Congress has built, the great India, in the last 60 years, they destroyed in just five years," the Congressman says. "Dear people of Kerala, to prevent them from destroying the country further, vote for the Congress and Tharoor."

Compared to Kummanam's huge campaign machinery, Tharoor's cavalcade is comparatively small with a handful of two-wheelers leading the way. Perhaps the complaint Tharoor is reported to have made to the Congress's central leadership about the non-cooperation of local Congress leaders is correct.

When I ask Ravishankar, who is watching Tharoor campaign from his vegetable shop, if the MP will win a third term in the Lok Sabha, he ponders for a while and says with a smile, "It is going to be tough. Look at the way the other man (Kummanam) is campaigning. His people are everywhere. They are pumping in money and people."

"After all, they are ruling in Delhi," he adds. "So, money is not an issue for them."

Who do you support, I ask.

"I am a Left supporter. I have been one for a long time," says the vegetable vendor, adding, "I am very disappointed that the Left fielded such a weak candidate from Thiruvananthapuram. Everybody knows he has absolutely no chance. The fight is between Tharoor and Kummanam."

"Some of my party friends tell me they did it on purpose so that it would help Tharoor. I hear they are silently telling the Left supporters to vote for the Congress," Ravishankar says.

"Both the Left and the Congress want to see that the BJP does not win here or anywhere in Kerala."