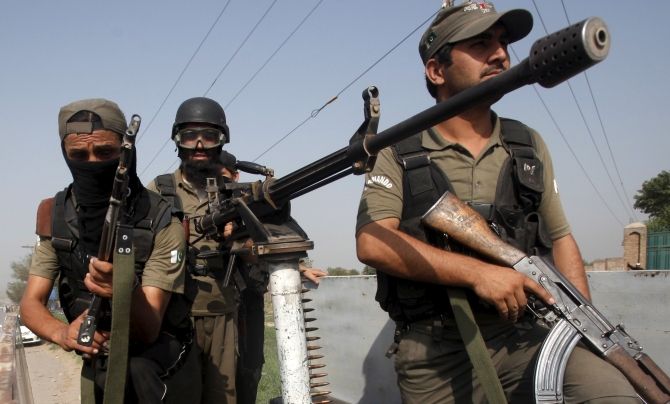 Soldiers arrive to repel an attack on an air force base in Peshawar, Pakistan. Photograph: Fayaz Aziz/Reuters

At least 42 people, including 13 militants, were killed on Friday when heavily armed Taliban terrorists in military uniforms launched a brazen attack on a Pakistan Air Force base and a mosque inside the compound, in one of the deadliest assaults on a defence facility.

A group of gunmen wearing explosives-laden jackets and armed with grenades, mortars, AK-47 rifles attacked a guard post as they tried to fight their way into the Badaber air base 6 kilometres outside Peshawar, the capital of Khyber Pakhtunkhwa province.

At least 16 people offering prayers at a mosque inside the air force camp were shot dead by the militants, military spokesman Major General Asim Bajwa said. Addressing a press conference he said that seven other people were killed in the ablution area of the mosque.

An army captain was also among 29 people killed in the attack on the Pakistan Air Force base and a mosque inside it, Geo TV reported.

Two junior PAF technicians were also killed in the attack, a PAF spokesperson said, adding that both airmen were deployed at the guardroom when the attack occurred.

All 13 terrorists were killed by security forces, Bajwa said adding that several of those killed were offering prayers at the mosque. He said that the terrorists were dressed in constabulary uniforms.

Terrorists entered the base at two points, splitting into sub-groups, sparking a fierce gunbattle with security forces, he said.

At least 22 people, including eight soldiers and two senior army officers, were injured in the attack.

The injured have been shifted to a military hospital in Peshawar and two have been taken to LadyReadingHospital. An emergency has been declared in both hospitals.

"Our suicidal unit carried out the attack," TTP spokesman Muhammad Khurasani said in an email statement. Khurasani claimed that 80 security personnel were surrounded by the militants and 50 of them killed but it was not confirmed. He also claimed that women and children were given safe exit which was also not confirmed.

Bajwa said security forces reached the area shortly after and sealed it off but a gun battle is still underway.

Corps Commander Lieutenant General Hidayatur Rehman conducted aerial surveillance of the base from a helicopter. Around 15 people were arrested during the search operation.

Army chief General Raheel Sharif has arrived in Peshawar and visited the wounded in hospital.

Prime Minister Nawaz Sharif condemned the attack and said, "Terrorists will be rooted out from the country". The Badaber air base is not functional and is mostly used as a residential place for the employees and officers of the air force.

Also on Friday, the police in Karachi claimed to have foiled a terrorist attack being planned on the Kamra airbase in Punjab province after the arrest of a suicide bomber.

The police said they had arrested a high-profile militant of the largely unknown Tehreek-e-Imarat Islamia Afghanistan. Peshawar has frequently been targeted by militants. Last

Last month, heavily-armed militants stormed an aerodrome in Balochistan province, destroying its radar system and killing two engineers. Militants had also attacked the JinnahInternationalAirport in Karachi in June last year in which 36 people were killed, including 10 militants.

Friday’s attack occurred at a site which is surrounded by tribal areas, the scene of a major military offensive against Taliban and other militants over the past year. The army launched the "Zarb-e-Azb" operation in June 2014 in a bid to wipe out militant bases to end the bloody decade-long Islamist insurgency that has cost Pakistan thousands of lives. 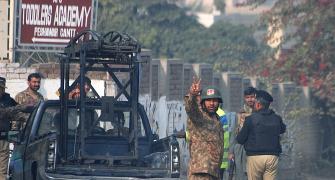 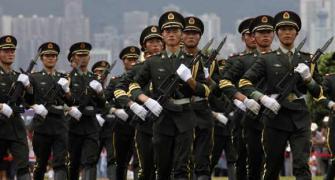 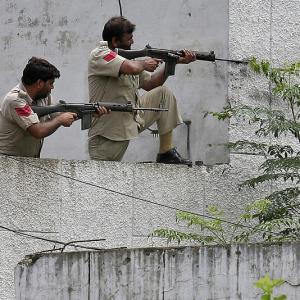