Terrorism, drugs, good governance: Rajnath says it all at SAARC

India on Thursday sought strengthening of SAARC monitoring desks on terrorism and drugs, underlining that illicit funds generated from narcotics and fake currency networks are being fed into supporting terror activities. 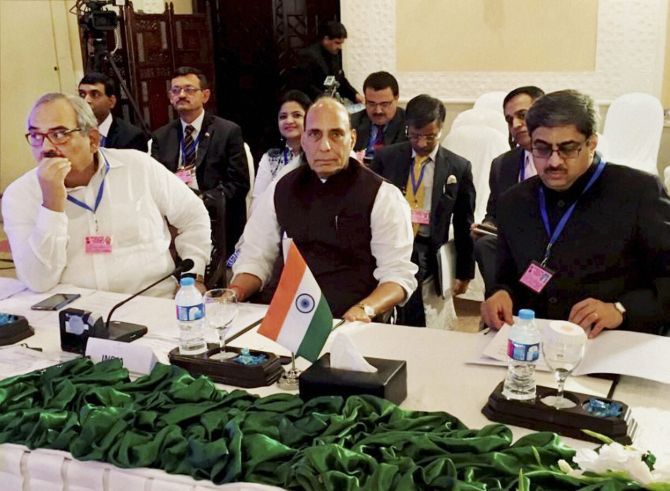 Terming drug abuse a grave challenge, Home Minister Rajnath Singh told the SAARC Interior Ministers that it is a problem which is connected with all types of organised crime.

"Today, drug business generates the highest illegal fund flows. Trafficking of drugs, coupled with the problem of increasing circulation of fake currency, feeds into supporting terrorism and can create economic de-stabilisation in our region," Singh said at the seventh SAARC Interior Ministers' conference in Islamabad.

He said that towards implementation of the regional convention on narcotic drugs and psychotropic substances, India has offered its full support and cooperation by way of capacity building and training programmes.

Singh also highlighted signature schemes of the Modi government like 'Beti Bachao Beti Padhao' asking the SAARC countries to give due priority to safety and security of women and children.

"Safety and security of women and children will determine the well-being and strength of our nations. It is timely and relevant that SAARC has accorded due priority to this area of cooperation, since new threats are emerging with increasing access to information technology and the changing nature of global economy," Singh said.

The home minister said that in India, number of new initiatives such as the 'Track Child' national portal and 'Operation Smile' have been taken to rescue children.

"We shared our experience at the ministerial meeting of the south Asia initiative to end violence against children, which we were privileged to host recently. Our prime minister had launched the flagship 'Beti Bachao Beti Padhao' programme," Singh said.

He said the scheme has rapidly expanded and has started contributing to ensuring the survival, protection, education and empowerment of the girl child.

"Since this August forum also discusses our cooperation against corruption, I would like to mention that achieving greater transparency and good governance is a cornerstone of our policy," the minister said.

"Terrorism remains the biggest challenge and threat to our peace. South Asia continues to be deeply affected by this malady, as witnessed most recently in cowardly terrorist attacks in Pathankot, Dhaka, Kabul and other places," Singh said after listening to Pakistan Prime Minister Nawaz Sharif and his Interior Minister Chaudhary Nisar Ali Khan.

"Merely strong condemnation of such terrorist attacks is not enough. We must harden our resolve to eradicate this menace and also take serious steps to this end," he said without mincing words.

The home minister also touched upon the issue of countries providing safe haven to terrorists and other criminals.

Singh said the will and the mandate of international community against proscribed and wanted terrorists and their outfits must also be respected and implemented.

"If we are to rid ourselves of terrorism, we will have to genuinely believe that attempts to distinguish between 'good' and 'bad' terrorists are misleading," he said, adding no type of terrorism or support to it can be justified on any grounds whatsoever.

Advocating an immediate and effective action against all those who support or encourage international terrorism in any way, whether they are state actors or non-state, he said "only then justice will be ensured for the victims of terrorist attacks such as in Mumbai and Pathankot. We must have the approach of 'zero tolerance' against any type of terrorism."

Singh called for implementation of SAARC regional convention on suppression of terrorism and its additional protocol, saying that it was "crucial" in common fight against terrorism.

The convention includes ensuring effective measures so that those committing terrorist acts do not escape prosecution and punishment, and are extradited or prosecuted.

"In our effort to tackle terrorism, we should look into all possible avenues of cyber-crime, its linkages with the terrorist world, and how these could be dealt with.

"Attention and efforts need to be devoted to ensure that social media and other modern technology is not misused for misleading especially the youth or promoting terrorism in any way."

He drew the attention of the participants to ratification of the SAARC convention on mutual assistance in criminal matters.

He also thanked the participants for extending support to India's proposal for being the host of second meeting of the high level group of eminent experts to strengthen the SAARC anti-terrorism mechanism in Delhi from September 22 to September 23.

Image: Rajnath Singh along with the Indian delegation at the SAARC Home Ministers' Conference in Islamabad. Photograph: PTI 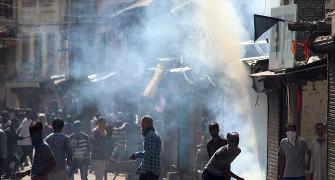 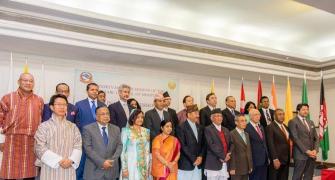 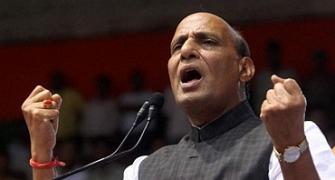