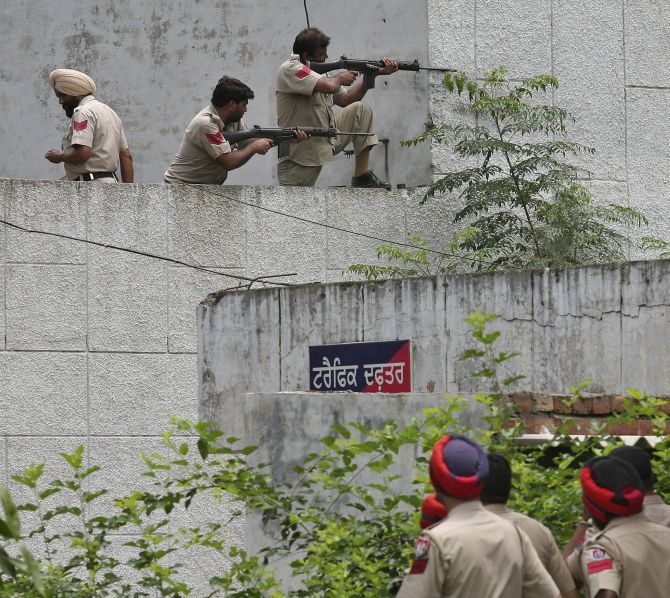 In a major terror attack, three fidayeen, believed to have come from Pakistan, on Monday attacked passengers in a moving bus and stormed a police station, killing seven persons, including an SP, while all the terrorists were gunned down after a day-long operation. 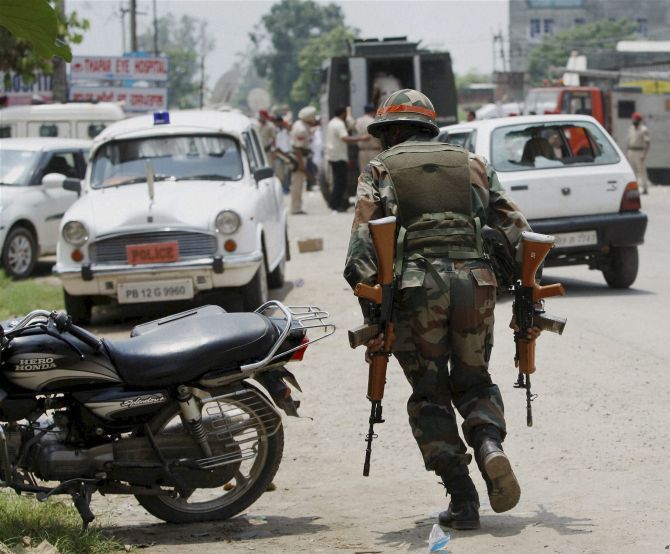 The terrorists have indulged in gun fire for more than 12 hours and are holed up in a vacant building near the Dina Nagar police station. Photograph: PTI

In the pre-dawn attack, the terrorists, suspected to be members of either Pakistan-based Lashkar-e-Tayiba or Jaish-e-Mohammad, in army fatigues first targeted a roadside eatery, then sprayed bullets on a passenger bus and later barged into the Dina nagar police station.

He said 15 were injured of whom three were in a serious condition in the attack by the terrorists who snatched a white Maruti 800 car and moved about in it before abandoning it. Local residents run near the site of a gunfight at a police station at Dina nagar town in Gurdaspur district. Photograph: Munish Sharma/Reuters

All the three militants were killed in the 12-hour-long gun battle with the police and elite commandos of the Special Weapons and Tactics Team.  Chinese-made weapons and Global Positioning Systems were recovered from them, Saini said.

Though there was no official word on who the attackers were, they are suspected to have sneaked into India from Pakistan through the unfenced border between Jammu and Pathankot or Chak Hira in Jammu district, according to inputs received by central agencies.

“The operation is over,” a top Punjab police official said at the end of the fierce gun battle. Combing operations continued for some time after the multiple attacks and the building was sanitised. 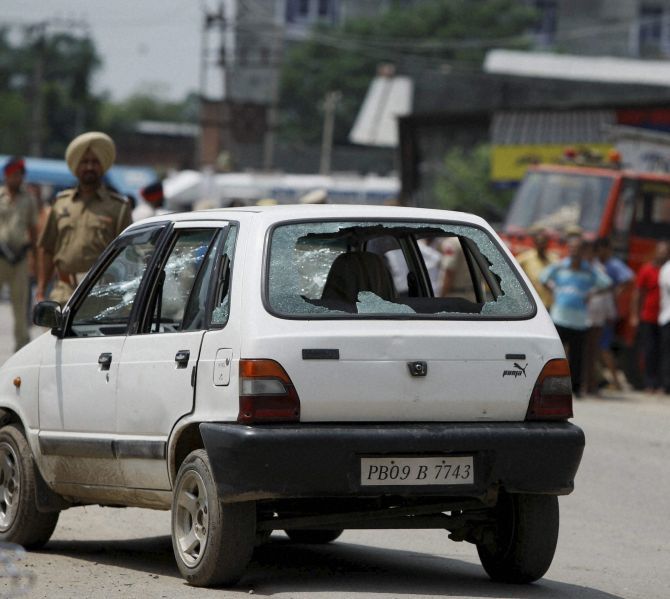 The white Maruti 800 that the terrorists used. Photograph: PTI

Police said out of those brought to civil hospital at Gurdaspur, seven seriously injured were referred to Amritsar. They were aged between 15-55 years.

“The terrorists were carrying sophisticated weapons. We have recovered ‘Made in China’ grenades from them. They were wearing combat fatigues,” Director General of Punjab Police, Sumedh Singh Saini said.

Saini said AK 47 guns and hand grenades were recovered from the terrorists, who attacked the sentry at the police station before engaging with the SHO and the SP.

He described the attack as “planned” as their modus operandi pointed at a specific direction. 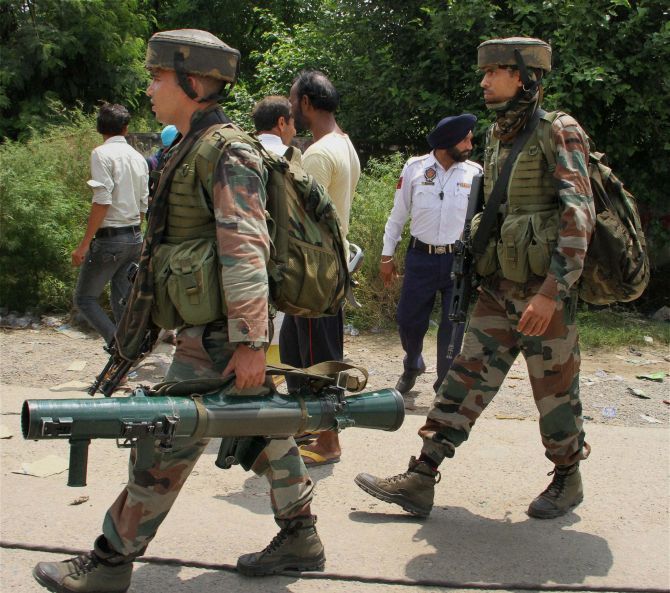 Police and army jawans have been pressed into action to deal with the terrorists. The security personnel have been battling the armed gunmen since 5 am. Photograph: PTI

There was heavy firing from both the sides, Saini said on the gun battle between the police and terrorists.

According to police, the attackers first targeted a roadside eatery and took off in a white Maruti 800 with Punjab registration number. They shot dead a roadside vendor near Dina nagar bypass.

They opened fire on passengers of a moving Punjab roadways bus before targeting a community health centre adjacent to Dina nagar police station.

The gunmen barged into the Dina nagar police station and opened indiscriminate fire. The militants also targeted another part of the complex where the families of police personnel reside and hurled grenades. 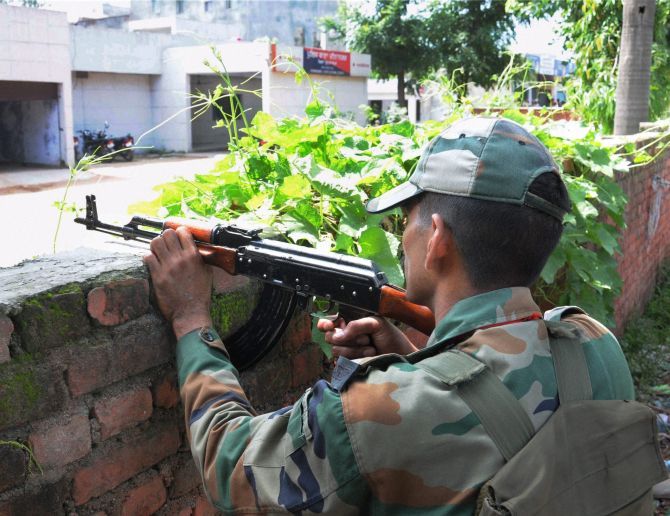 As the security personnel battled with the terrorists, Home Minister Rajnath Singh had a meeting with Punjab CM and NSA Ajit Doval to assess the situation. Photograph: PTI

An alert has been sounded along the international border in Punjab and Jammu as the terrorists are suspected to have infiltrated from there, the sources said.

A high alert has been sounded across the country including Delhi, Haryana and Uttarakhand.

Security was especially stepped up at railway stations in the national capital and deployment of policemen has been strengthened further. The number of policemen has also been increased at busy public places including markets and shopping malls. 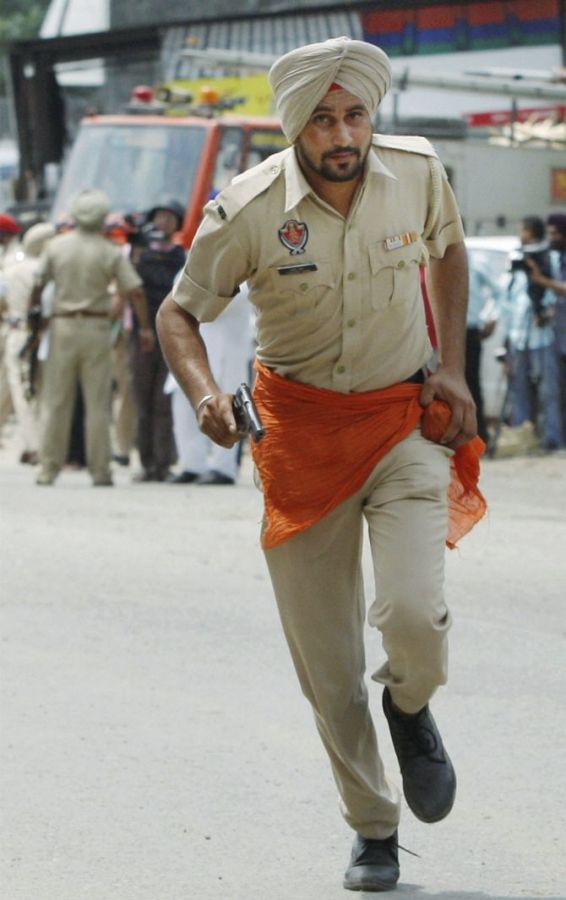 A police jawan in action during an encounter with militants. Photograph: PTI

Singh said he will make a statement on the issue on Tuesday in Parliament, where members sought a detailed government response.

After the meeting, the home ministry said the minister appreciated the operation of the Punjab government and various measures discussed to prevent recurrence of such incidents in the future.

A top official told reporters after the meeting that the attack was “serious”.  He was replying to a question whether the government considered it a big attack. “I don’t know whether it is big or small.  It is serious,” he said. 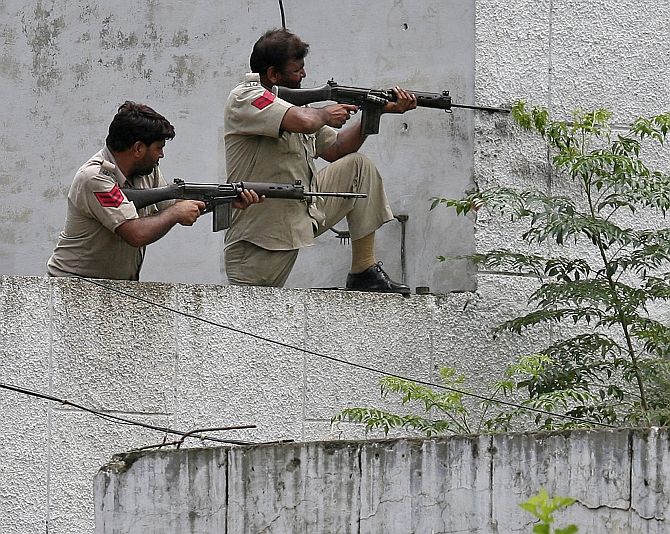 Policemen take their positions next to a police station during a gunfight at Dinanagar town in Gurdaspur district. Photograph: Munish Sharma/Reuters

Dina nagar town, which is close to Pakistan, falls in Gurdaspur district. It is sandwiched between Gurdaspur town on the one side and Pathankot on the other and lies about 260 km from capital Chandigarh.

On October 14, 2007, seven persons were killed and more than 30 were injured when a powerful explosion took place at the cinema hall in Ludhiana, the last major terror attack in the state which had grappled with Sikh militancy for several years from 1980s. 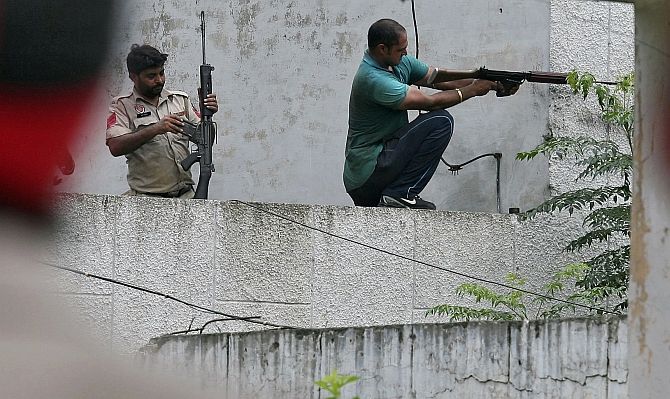 Policemen take their positions next to a police station during a gunfight at Dinanagar town in Gurdaspur district. Photograph: Munish Sharma/Reuters

Meanwhile, Baljit Singh, the police officer, who was killed in the gun battle with terrorists in Gurdaspur district, was a son to a policeman who too was killed by militants during the height of militancy in Punjab in 1984.

Baljit had joined the force in 1985 as assistant sub-inspector following the death of his father, Inspector Achhar Singh, who was killed in a road accident masterminded by terrorists a year earlier.

Gloom descended on Baljit’s Santpura-located house as the news of his death in the incident spread and a sizable number of cross-sections of people including top police officials rushed to his house. 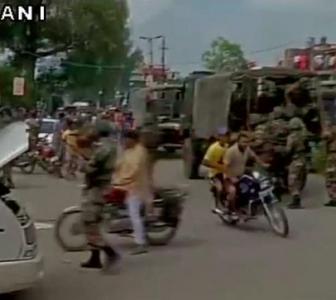 #Gurdaspurattack: When residents awoke to the sound of gunfire 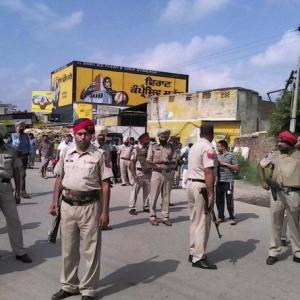 'Want peace with our neighbour, but not at the cost of national pride' Terrorism a national problem, not a state one: Punjab CM after Gurdaspur attack