The Governor of Andhra Pradesh accepted the resignation of Infrastructure Minister K Venkat Reddy on Wednesday. Reddy who is a member of Legislative Assembly from the Telangana region had submitted his resignation to Governor, Narasimhan on October 2.

The resignation is part of the move to apply pressure on the Congress to declare a separate Telangana state. When contacted, Reddy said that he is happy that his resignation has been accepted.

He however added that he would be happier if his resignation to his MLA seat is accepted. He however refused to comment on the resignations of the rest of the MLAs from the region.

The resignations of the rest of the MLAs would depend largely on the stand taken by Panchyat Raj minister Jana Reddy who currently is on a tour to Orissa. Once he comes back on October 7, a decision to this effect would be taken.

The Andhra Pradesh government however remains unfazed by this resignation. Sources said that it was Chief Minister Kiran Kumar Reddy who urged the Governor to accept the resignation.

According to the CM, it was better to let Telangana ministers go rather than have in the ministry and be threatened everyday. However, the real problem for the Congress is if these people resign from their MLAs posts.

"If these resignations are submitted and accepted, then the Congress would face a problem in term of numbers," said a source. 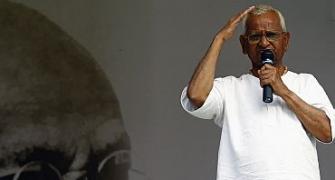