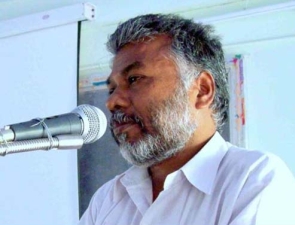 Contemporary Tamil author Perumal Murugan on Monday ended a self-imposed literary exile of 19 months with a new book -- a collection of 200 poems A Coward's Song.

Threatened by protests from Hindutva activists against his Tamil novel Madhorubagan (One Part Woman), which they deemed offensive, a dismayed Murugan had announced in a Facebook post in December 2014 that the writer in him was dead.

"Author Perumal Murugan is dead," he had written.

In July, the Madras high court had dismissed a plea seeking prosecution of the author and ban of his "offensive" book in Tamil, besides forfeiting all the copies of its English translation "One Part Woman" saying there was nothing obscene in the book.

Dressed in a white shirt and dhoti, Murugan, speaking in Tamil read out a powerful statement after the launch of his new book at the NehruMemorialMuseum and Library, which was translated and read out in English.

The 50-year-old author also recited two poems "Hometown" and "A Coward's Song" before that.

Describing the first three months after he had declared his "death", Murugan said he did not want to "even write one word". He said during that time he felt like a like "a walking corpse", and "like a rat in a burrow".

"It was poetry that saved me. My mind has now attained a state of being able to write poetry," he said, adding now when he writes he feels a censor seated within him and "unable to shake him off".

"My writing will do little to change the world so let me be quiet and speak through my writings," said the author, who began writing poetry when he was a child.

In the discussion with Nilanjana Roy following the reading statement, Murugan said he believed "No writer can write a single work in defence of caste."

"In my perception caste is ubiquitous but present subtly in society. Why caste exists and why is so divisive is a question that plagues me," Murugan said.

The author was introduced by poet Ashok Vajpeyi, who said it was "encouraging for poets like us that he is alive and that he chose to write poetry instead of prose".

Refusing to delve into the dark days following his self- imposed exile, the author, who is also a professor of literature, said he never believed he would be able to write again.

"Today is a happy day for me. My book of poems has been published and released in Delhi. I don't want to relive my dark days of 2015," he said.

Murugan, who has previously written six novels, four collections of short stories and four anthologies of poetry, said he doubts whether he can continue to write in his usual realist mode.

"I doubt whether I can continue to write in future in the realist mode. I might have to resort to other techniques. Only time will tell on that," he said.