Talks with China going on over border row: India

Source: PTI
January 18, 2010 15:47 IST
With reports from Jammu and Kashmir indicating Chinese hold over Indian territory in Ladakh, Minister of State for Defence M M Pallam Raju on Monday said India 'need not be alarmed' as talks were in progress to settle border disputes. He also gave the benefit of doubt to China on reports of Chinese produced arms finding their way to militants in the Northeastern states.

"As long as the border dispute is being worked on and debated between the two countries, we need not be alarmed about all these incidents, whether actual or reported," said Raju.

Recently, at a meeting convened by the Jammu and Kashmir government in Leh, where army officials were present, it was agreed that China was encroaching into the land with a 'specific design' to grab a particular area to extend its control till Indus river.

However, Raju noted today that the most important aspect of the bilateral relationship with China was the growing trade. The minister also said that in the recently concluded Copenhagen Climate summit, both India and China had worked together for their rights.

"I think there are several areas we can work on and these things (border disputes) will be resolved," he added.

Pointing out that China was a major arms producer and exporter, Raju said there was a possibility of a third organisation picking up Chinese arms and selling it to the rebels in the Indian states. "That does not mean we have to suspect the role of China in this," he added.

Source: PTI© Copyright 2020 PTI. All rights reserved. Republication or redistribution of PTI content, including by framing or similar means, is expressly prohibited without the prior written consent.
Related News: Raju, China, India, Copenhagen Climate, Kashmir
SHARE THIS STORY
Print this article
How India must face the Chinese threat
Emerging India: Insecure and unsafe
How India, China can mastermind the Asian century 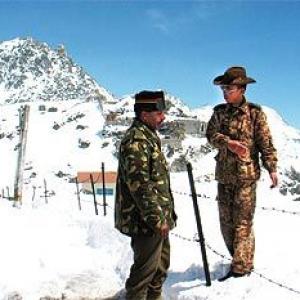 It's official: India has lost territory to China