Third round of talks between Gujjars, state govt fails

The third round of talks between Gujjars and the Rajasthan government over the issue of reservation in government jobs failed on Saturday evening with the community's leader Kirori Singh Bainsla saying that the stir will continue till its demands were met.

The third round of talks, a one one-to-one meeting between Bainsla and Rajasthan Chief Minister Ashok Gehlot, which lasted for over one and a half hours at the latter's residence ended with no 'fruitful results', Bainsla said after the negotiations and announced that the agitation will go on.

Gujjars in Rajsathan have been demanding five percent reservation for the community in government jobs.

Bainsala said he was not satisfied with the meeting and soon left the CM's residence along with his supporters.

However, the state government is hoping for yet another round of meeting with Bainsla to resolve the issue.

Another meeting with the Gujjar leaders would take place soon to resolve the issue but the venue and time have not been fixed as yet, a government spokesperson said.

Legal experts are examining their demand of reservation and any decision will be taken later accordingly, he said. 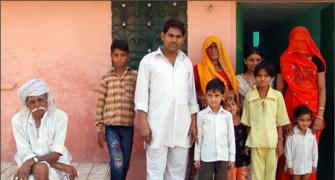