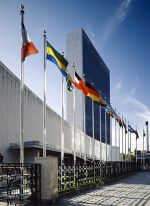 The United Nations headquarters overlooking the East River in United Nations suffered "major damage" as the megastorm Sandy caused heavy flooding in the world body's complex, the United Nations security chief has said. The expansive UN building in the heart of Manhattan reopened on Thursday after remaining closed since Monday in the wake of the storm, which crippled life along the US East Coast and resulted in deaths of over 80 people as well as significant economic damage. UN officials assessed the damage to the property after the storm had passed and said the "most serious damage" has been due to flooding and high wind, which affected communications and other infrastructure.

Starr said the storm and the subsequent flooding damaged the UN's chilled-air plant system and other electrical operations. "We are not back to full operations," he said. "We clearly have some damage to our communications systems." Under-Secretary General for Management Yukio Takasu said a small fire broke out in the area that houses the electrical switchboard after it was flooded, and power to the entire UN complex had to be shut off as a safety measure.

Giving further details of the damage caused to the UN building, Takasu said a plastic sheet that covers the top of the UN General Assembly hall was torn off and the front entrance to the GA building also suffered damage. Parts of the UN communications system were "severely disrupted" and the website was also compromised. Starr said the UN printing shop was also badly damaged by flooding, though the archival documents at the UN were secure. The main cooling system area was flooded and had to be shut down. UN Secretary General Ban Ki-moon has written to President Barack Obama and spoken to the Presidents of Haiti and the Dominican Republic and New York Mayor Michael Bloomberg to express his solidarity and to pledge assistance of the UN in the recovery effort, his spokesperson said in a statement.

Ban's spokesperson said the UN Chief also intends to speak with other Caribbean leaders and with the Governors of New York and New Jersey. The office for the coordination of humanitarian affairs has been mobilised to provide maximum possible assistance. The spokesperson said despite disruptions, all essential operations went ahead and contacts with peacekeeping and other missions around the world were maintained without interruption. The headquarters complex is expected to be back at full capacity soon. The secretary general "pledges the full support of the United Nations in rebuilding today, strengthening global disaster risk reduction and preparing the world for a safer tomorrow," the UN statement said.

Takasu said it is too early to give an estimate of the economic loss to the UN complex caused by Sandy and added that preventive measures taken before the storm helped mitigate the damage. Due to the flood damage, the UN Security Council had to relocate from its normal chamber to a separate building in the complex to hold a meeting on Somalia on Wednesday. "This was a very unprecedented hurricane," Takasu said, adding that there will be several "lessons learnt" in the aftermath of Sandy. The officials said the 1.9 billion dollar renovation of the United Nations that is due to be completed in 2013 would not be delayed due to the damage caused by the storm.

Which nations received the HIGHEST FDI?