Sunita Williams heads back to space 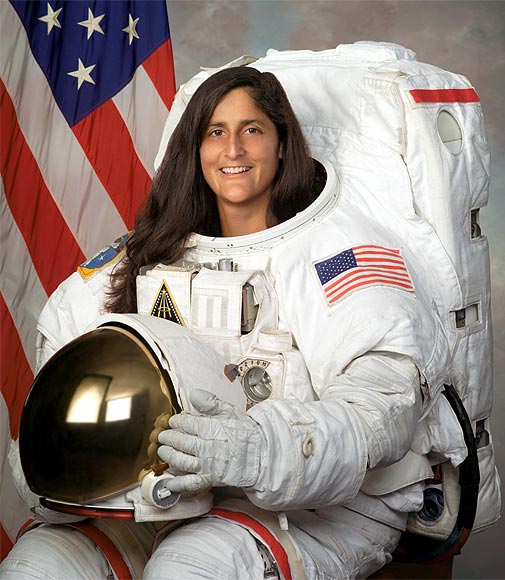 The astronaut, who will take over as the commander of the International Space Station, says she is not nervous but 'psyched'. Suman Guha Mozumder reports

Astronaut Sunita Williams, who holds the record for the longest spaceflight by a woman after 195 days spent in space in the year 2006, is set to revisit the International Space Station.

And this time Williams is going to be the commander of the ISS after the existing crew comes back two months after she and her fellow astronauts reach.

July 14, Williams will launch from the Baikonur cosmodrome in Kazakhstan, where she went last month for pre-flight training. Her mother Bony Pandya -- who always believed her daughter Suni (as Williams is to friends and family) "would become somebody someday" but could never imagine her becoming an  astronaut -- also left last week for Kazakhstan for 10 days to meet with her daughter.

"Like my sister, we are all very excited about Suni's space journey," Williams's sister Dina Pandya told rediff.com.

Williams will launch for the ISS as flight engineer at 9.40 pm Central Daylight Time July 14 as part of Expedition 32. After the existing three crew members at the ISS leave in September, she will become commander of Expedition 33, which will return a week after the presidential election in November.

Williams will launch into space with flight engineers Yuri Malenchenko of the Russian Federal Space Agency and Akihiko Hoshide of the Japan Aerospace Exploration Agency.

"This time Williams is actually going to spend quite some time again on the space station, and she'll be doing a mixed bag of scientific research," Jay Bolden of the National Aeronautics and Space Administration's Johnson Space Center told rediff.com. "There are about 200 different experiments she is slated to do. Besides, she'll also be doing some repair work on the space station, and possibly do a couple of space walks as well. She'll be using this opportunity to connect with a bunch of students. She'll be doing a lot of experiments, and talk to the students about these. She'll also be doing medical research and some biology experiments as well."

From space, Williams will be talking students, mainly from elementary, middle, and high schools, when schools start in the fall.

"She'll be talking to them pretty much all throughout the country," Bolden said.

As a member of the Expedition-14 crew, she did four spacewalks totaling 29 hours and 17 minutes of EVA or Extra-Vehicular Activity. She returned to earth with the STS-117 crew, landing at the Edwards Air Force Base in California, June 22, 2007.

Before leaving for flight training in Kazakhstan, Williams told NASA: 'I think most people know our increment got a little decreased in time But what that means is it's going to be fast and furious, hot and heavy, right from the very beginning. As soon as we get there we'll be preparing for an HTV (H-II Transfer Vehicle), which is a Japanese cargo vehicle, to come up. We'll be grabbing that and docking it to the International Space Station, and it has some time-critical payloads up that we'll be operating with.

'Right after that we may have one of the commercial vehicles, Orbital or SpaceX. We may do a spacewalk. So it's going to be really busy right from the get go, and then it will settle down a little bit and, and we'll do the main thing that we're up there for science on the International Space Station. We've got a mix of internationals (crew members), of course, experienced people and rookies, so it's going to be really dynamic. I'm really looking forward to the fact that they'll be, this combination of people. Last time it was just three people on board, this time we'll have the pleasure of having six people on board, and it will be changing. So it will be really dynamic.'

Asked how she felt about being the commander of the space station, she said, 'It's not going to physically change anything. Everybody up there is so experienced and so knowledgeable. I just can't say enough about Yuri and Aki, they're just great crew members to have, and I'm falling back on them all the time for them to take the lead on stuff. They're great, they're just perfect. But I think the one thing that it will change is, just the roles and responsibilities and that's in regards to emergencies or something like that, if we have any problems with the space station.'

She said that a friend of hers has asked her if she was nervous about being the commander. 'I'm not nervous at all,' she added. 'I've got a team that we've worked for the last two-and-a-half years together, and I think that's where you really foster that leadership-followership thing, years beforehand. When you get up on the space station, you know what to do. So, I'm not nervous about it all. I'm psyched.'
Suman Guha Mozumder in New York
Related News: Sunita Williams, ISS, National Aeronautics and Space Administration, Jay Bolden, Yuri Malenchenko
Print this article
'It is pretty awesome to leave the planet'
Ready to conquer space
Sunita Williams arrives to a hero's welcome

When one world to conquer isn't enough