Sunil Joshi, NOT Aseemanand the mastermind behind Samjhauta blasts

By Vicky Nanjappa
January 11, 2011 17:27 IST
While the National Investigation Agency is convinced that Swami Aseemanand, a Hindu right-wing leader, was involved in the Samjhauta Express blasts that killed 68 people in 2007, they feel that he is not the mastermind behind the attack. The swami's confessions point out that though he was aware of the attack, it was planned by Sunil Joshi, Aseemanand's alleged right hand man, who was murdered in mysterious circumstances in Dewas in Madhya Pradesh on December 29, 2007.

The NIA has announced a Rs 10 lakh cash reward each for Sandeep Dange and Ramchandra Kalsangra -- the suspects in the case named by Aseemanand in his confession. However, another name that appears in NIA's most-wanted list in this case is that of Ashok who goes by the alias Amit. The investigators have announced a reward of Rs 2 lakh for information on the third suspect.

According to the NIA, it was Dange, Kalsangra and Ashok who executed the Samjautha blasts under the guidance of Joshi, who was also involved in the Malegaon bombing of September 2006. This was revealed by Aseemanand who confessed to his involvement in the Samjhauta blasts during his interrogation by the NIA following his arrest on November 19.

The Samjhauta blasts is one of the biggest terror operations carried out by this network and if investigators are to be believed they are close to cracking this case. The initial part of the probe reveals that Aseemanand did not have a major role to play in the bombing and the plotting was done by Joshi and his men.

Aseemanand met Dange, Kalsangra and Ashok for the first time at the house of Bharat Rateshwar, one of the leaders of the network that allegedly bombed Malegaon, Ajmer, Mecca Masjid and the Samjhauta Express, in Valsad. During this meet even Sadhvi Pragya Singh Thakur, the accused in the Malegaon blast case, was present. The trio arrived with Joshi and when Aseemanand told them that it was time for revenge, he sensed that they already had their plans in place.

In his confessions to the NIA, the godman said that when he met Joshi all he was told that there was a surprise for him and was asked to keep a tab on the news. "A couple of days later, I read in the newspapers that more than 60 people were killed in the Samjhauta Express blasts. It was on February 16, 2007, when I met Joshi and Rateshwar at a temple in Balpur, that he told me I would be hearing good news soon," said Aseemanand.

After the meet Aseemanand claims to have returned to Shabri Dam, his ashram at the Dangs region of Gujarat only to read about the blasts two days later.

The NIA probe points out that Joshi was the key man behind the Samjhauta blast, who arranged for both funds and logistic. According to the investigators, Joshi had all the answers in case since he was more involved that Aseemanand, but he is unfortunately dead.

"I called Joshi after the blasts and he told me that it was carried out by his men," the godman told the NIA. The men that Joshi spoke about have not been mentioned by Aseemanand in his confession, but NIA suspects that Dange, Kalsangra and Ashok's direct involvment in the bombings.

However, Aseemanand's confession makes it clear that he was aware of a possible attack. In a meeting two days before the blast Joshi mentioned that the Samjhauta Express would be a "good to target" since Pakistani nationals travel by it.

Investigations based on these statements reveal that Dange arranged for the explosives, while Kalsangra and Ashok planted them. Another person, Lokesh Sharma, was also part of the core team that executed the blast under Joshi's guidance.

However, with Joshi dead, it is the arrest of these men that will help solve this case. They could give leads as to who financed the attack and if there we more persons involved in the case, say sources.

The NIA is also going to investigate if Rashtriya Swayamsevak Sangh leader Indresh Kumar provided funds for the attack. 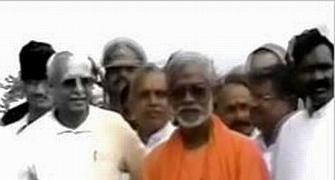 Can the innocent be released from jail now?
Is Aseemanand the mastermind of 'Hindu terror?' 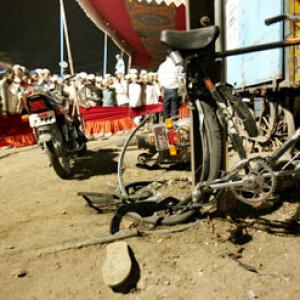