Security forces on Sunday gunned down two terrorists holed up inside a school on the outskirts of Srinagar, ending an encounter of over 14 hours in which two Army men were also injured.

The terrorists had entered the Delhi Public School located close to the Srinagar-Jammu National Highway on Saturday evening after attacking a Central Reserve Police Force party in the nearby Pantha Chowk, killing one officer and injuring a constable.

The road opening party of the CRPF was attacked in high security zone located less than a kilometre away from the headquarter of the Srinagar-based Army Corps.

Immediately thereafter, the security forces cordoned off the school premises which has seven buildings, comprising 36 rooms, and the staff and others were evacuated on Saturday night itself.

An offensive to flush out the terrorists was launched on Sunday morning, a police official said.

"The exchange of fire between security forces and militants began at around 3.40 am," he said.

"The gunbattle is over and two militants have been killed," the official said this evening after over 14-hour armed engagement.

He said the search and sanitisation operation was, however, underway at the encounter site.

Two Army personnel were injured in the gunbattle on Sunday morning, the official said. He said the injured have been taken to a hospital.

Earlier, Jammu and Kashmir's Director General of Police S P Vaid had said that there were reports of the presence of two terrorists inside the building but the exact number would be known after the search of the complex was over. On the operation getting prolonged, he told reporters, "There are 36 rooms, the building is huge. So, it has to be searched floor by floor, room by room."

He said the security forces wanted to ensure that the (school) building was safe.

"The enemy has a nefarious design that the school buildings are destroyed and children have nothing to study and ultimately abandon their studies, which we will ensure that no such thing happens," the state police chief said.

He was speaking to the media on the sidelines of wreath laying ceremony of CRPF officer killed in yesterday's attack.

The authorities had imposed restrictions under section 144 Code of Criminal Procedure from Ram Munshibagh to Sempora stretch of the national highway as a precautionary measure to avoid protests near the encounter site.

The mobile internet services have been affected across the valley as the network speeds have been reduced.

The Jammu and Kashmir Police has asked its personnel to avoid Eid prayers in public places in the wake of mob lynching of a deputy superintendent of police outside the Jamia Masjid in Srinagar.

Police personnel have been advised to offer prayers in mosques in district police lines or protected mosques.

'You are advised to instruct the field and subordinate formations that they shall not offer Eid prayers in isolated or general mosques or eidgahs,' an advisory issued from Police Control Room on behalf of Inspector General of Police, Kashmir, to all police stations across the Valley read.

It said all police personnel shall offer Eid prayers in mosques in district police lines Srinagar or PCR Kashmir.

'In other districts also, the Eid prayers shall be offered in DPL mosques or protected mosques where the safety of your personnel is ensured,' the advisory read.

Asked about the advisory, Vaid said, "It is good to take precautions”.

The advisory comes in the wake of mob lynching of Dy SP Mohammad Ayub Pandith outside the historic Jamia Masjid in Nowhatta area of Srinagar on Thursday during Shab-e-Qadar prayers.

IMAGES: Security personnel during an encounter with terrorists holed up inside a school on the outskirts of Srinagar. Photographs: Umar Ganie/Rediff.com 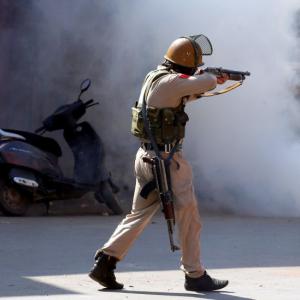