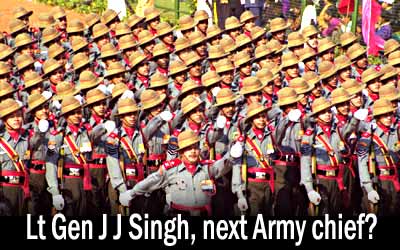 India is likely to have its first Sikh army chief.

Improbable as it sounds but no Sikh has till date ever become the army's chief of staff, even though Sikhs, as an ethnic group, are the single largest chunk in the army at about 10 per cent of the million-strong force.

Ironically, his closest rival is a colleague in more ways than one: Lieutenant General Hari Prasad, GOC-in-C, Northern Command.

Both graduated from the National Defence Academy, Khadakvasla, and both are part of the Maratha Light Infantry, which is headquartered in Belgaum, Karnataka.

Thus, a journalist recently billed their race for the top spot as 'Ganpat versus Ganpat.'

Ganpat is the endearing term used to describe an officer or soldier from the Maratha Light Infantry. This could be because many Maharashtrians revere Ganpati or perhaps because Maharashtrians often have the name Ganpati or Ganesh (another name for Ganpati and often used interchangeably).

Interestingly, in the air force, Maharashtrians are referred to as 'Taans', after Tatya Tope, a commander with the Rani of Jhansi.

Current Army Chief General Nirmal Chand Vij, is due to retire on January 31, 2005.

Not only are Lieutenant Generals Singh and Hari Prasad NDA batchmates, both were commissioned on exactly the same day: August 2, 1964, thus giving them almost equal seniority.

Graduates from NDA (or any other training centre or course) are commissioned on the basis of their passing out grades. The higher grade students/cadets are commissioned first, thus making them the senior person to their batchmates with lower grades.

One can bet that 40 years ago, neither Lieutenant General Singh nor Lieutenant General Hari Prasad would have ever guessed that the race for the top seat would boil down to slightly better passing out grades and an hour's (or less) seniority in the commissioning!

Nevertheless, it is early days to actually predict the next chief. After General Vij, the seniormost Indian Army officer is the Vice-Chief of Staff Lieutenant General Shantanu Chaudhary, who is due to retire at the end of this year. Only after his retirement does Singh become the seniormost lieutenant general, followed by Hari Prasad.

Moreover, the final choice is always political, decided by the Cabinet and in particular by the prime minister along with the defence minister.

The fact that in the present Cabinet, where the defence minister is perceived as the number two in the government, virtually makes it their call and the Cabinet is guided by many considerations, seniority being just one of them, though an important aspect.

Among the considerations, perhaps most important for the top post -- the job is really more administrative in nature involved in dealing with the outside world -- is the ability to get along with the civilian leadership and bureaucrats of the country. Other considerations include the commands held and the decorations earned.

In the past, war experience was a huge bonus but since 1971, India has not fought a full-fledged war except for Kargil and the various battles against terrorists.

Also Read: The Heroes of Kargil

But given the political fallout of superseding a junior over a senior unless the reasons are clear and justifiable, for the past two decades, the government has stuck strictly to the seniority principle.

Ironically, many believe that India is getting a Sikh four-star general 36 years too late, after Lieutenant General Harbaksh Singh, GOC, Western Command, 1968, was overlooked by the then political leadership. Indira Gandhi, the then prime minister had picked Lieutenant General (later Field Marshal) S H F J Manekshaw, who later led the Indian Army to its finest victory yet over Pakistan in 1971.

Also Read: The courage to say No!

Lieutenant General Harbaksh Singh, before he died in 1999, had claimed that he was denied the chief of staff post after being promised the same by Indira Gandhi and by then prime minister Lal Bahadur Shastri, who was most impressed with his brilliant tactics that allowed the Indian Army to reach the outskirts of Lahore in 1965.

But Major General Ashok Mehta (retd) claims that story is untrue. "Manekshaw was the senior of the two and Indira stuck to the seniority principle," he says. And there is no doubt that Manekshaw's record was equally impressive, if not better. Given that both men were brilliant and eminently capable, the final choice often boils down to aspects such as seniority and the ability to get along with the civilian leadership.

Both Lieutenant Generals Singh and Hari Prasad are undeniably brilliant with incredible track records. Thus, it is hardly surprising that both are commanding India's two most important commands: Western and Northern respectively. And thus their race comes down to the seniority principle where Singh has the edge.

Moreover, before Lieutenant General Singh took over Western Command, he was GOC of ARTRAC (Army Training Command), headquartered in Simla, and thus became GOC-in-C first. Singh is also the colonel commandant of the Maratha Light Infantry, the mother regiment of both generals. Lieutenant General Hari Prasad is the colonel commandant of the Jammu and Kashmir Light Infantry.

The next chief's name is normally announced two months ahead, in this case by November 30, 2004.

Also Read: How the army chief is selected

Major General Mehta believes that under the circumstances, Lieutenant General Singh is undeniably the senior and should thus become the next chief of staff. He also said he wished the media would not start speculating on the succession so early!