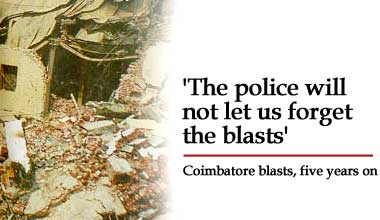 Fear no longer hangs over Coimbatore. But the scars left by the serial bomb blasts of February 14, 1998 are yet to heal completely.

"Business had picked up around Diwali," a trader says. "Then the police spoiled everything. Suddenly they put up barriers everywhere and started checking every traveller."

The trader, like others in Coimbatore, understands the exercise was an elementary precaution on the fifth anniversary of the serial blasts. What he cannot accept, or understand, is the extent to which the police pushed it.

"I don't mind if they check for weapons," he said. "But when a businessman comes here even with Rs 10,000 they take him to the police station and ask for an explanation! You think anybody will come here to make purchases? Even if we want to forget [the blasts], the police will not let us."

The police say they are only doing their duty. The check posts are a must; better safe than sorry.

"We keep an eye on the troublemakers in both [Hindu and Muslim] communities," an officer of the intelligence wing said. "We do not look at banners but at individuals."

Sathyanarayan is the RSS organiser for the Coimbatore and Niligiri districts. He reminds you about two bomb attacks in January and says Tirupur in the neighbourhood will be the next target.

Auto-rickshaw drivers said though there is no fear in the air, business has slackened.

Dayalasundaram, an astrologer, believes the blasts were a turning point for Coimbatore, but are not the cause of the city's problems today. The real problem is water -- or rather, the lack of it. As of now, drinking water is supplied only once in four days. To add to Coimbatore's woes, Kerala is building a dam across the River Bhavani across the border, which may worsen the situation.

What has happened to the shops destroyed in the blasts and looted in the riots? 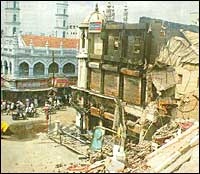 "Muslim shops were selectively looted and burnt," a Muslim shop-owner says. "The government gave small compensations to those who filed FIRs. The majority could not, and did, not complain.

"How could we go to the station on that day? The riots were supported by the police because the cause of the riots was the stabbing of a policeman. You think we would have been safe in a police station that day?"

After the blasts, Muslim businessmen formed a society to help their affected brethren. But that effort didn't really take off, as there were many fraudulent claims.

Hindu shop-owners too say they received little or no help from the government. "The police hung around for a few days and then left for other places," says one shopkeeper.

Today, business establishments have arranged for their security. Thus, the bigger of the jewellery and cloths shops have armed private guards and metal detectors.

In the city's slums, the people seem happy. They have forgotten the blasts. "Now everything is okay, an old man said, "because we have the AIADMK [All India Anna Dravida Munnetra Kazhagam, led by J Jayalalithaa] government, and the police are strict with Muslim militants. If the DMK [Dravid Munnetra Kazhagam] returns to power, the old problems will come back.

What is the difference between Coimbatore and other cities in Tamil Nadu? In other cities, every skirmish is not taken seriously. Here it is.

Every time there is a fight on the streets, the first thing the police check out is who the antagonists are. If they are from the same community, the case is dealt without fuss. If they are not, the police intelligence wing is informed, which makes sure the known troublemakers from both sides do not use the incident to further their agendas.

"We get calls from public-spirited citizens on both sides to inform us when there is trouble brewing," a police officer said.

A Ganesh Nadar in Coimbatore
Print this article