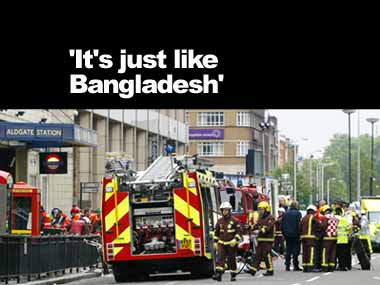 On Thursday, July 7, I was planning to go on an Exploring Banglatown walk in Brick Lane in London. I was expecting to check out the Rosogolla and Ilish fish and connect with my Bangla roots.

According to my Exploring Banglatown leaflet,the first stop of the walk was Aldgate tube station. St. Botolph's Church, Aldgate was where an Indian Christian named James was buried in 1 618. Around the corner was the old East India House and Calcutta House. It was a rainy gray morning and after having stayed up late watching the Olympic festivities, I was off to a slow start. As I was getting ready to leave, the friend who I was staying with pointed to the television and said: "Wait."

That was how, as I stood there eating a bowl of steaming porridge, I learned that a bomb had gone off at Aldgate tube station killing two people.

And Russell Square and Kings Cross and Liverpool Street. As the news of the daisy chain of blasts slowly emerged it occurred to me how our lives were mapped out along the underground passages of London. My uncle in London went through Kings Cross every day on his way to work. I had gone through Liverpool street the night before. My cousin in Blackpool said those were the stations she used on a daily basis when she lived in London. It could have been any of us.

But instead there we were, frantically trying to e--mail and text message friends to assure them we were okay. Frantic messages from anxious families in India filled up the voicemail box. Cell phones were not working and people queued up at the familiar red telephone booths on London streets.

But I walked through the dripping rain to Brick Lane, home to London's Bangladeshi community. Here in a part of London which is 70 percent Muslim, in some ways it seemed business as usual. Restaurants with names like Naz Cafe were open for business, offering the usual tandoori delights along with Bangla specialties like chicken with shatkora fruit. 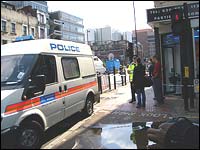 At the Taj Supermarket, a Singaporean mother and her son, stranded by the paralyzed transport system, made most of their afternoon by examining the piles of shining silvery rui and boal fish. Shops that sold Bengali tapes and burkhas and prayer mats had opened for business though the Sonali Bank which sent remittances home to Bangladesh had closed early in light of what it called "disturbances in central London."

But the tragedy of the morning was everywhere. Every transistor radio in the little travel agencies and corner stores was crackling with the news. The shriek of ambulances and whirr of helicopters overhead was a constant backdrop.

At the end of Brick Lane, across the street from the dusty Aftab Ali Park, a line of police tape had cordoned off Aldgate and Aldgate East stations. Tourists and residents were standing around, some taking pictures. Some Japanese tourists helplessly leafed through their London A to Z's trying to figure out how to get to their destinations now that the tube was not running.

A tourist from Bangladesh named Palash stood at the police barricade and said, "It's just like Bangladesh -- It's all about creating panic. I remember when terrorists hit a string of cinema halls all at once."

But if there was panic, here in East London, far away from the mayhem of mangled buses near Russell Square, the panic was muted. Much has been made of the British stiff upper lip in the wake of the blasts. Here in Brick Lane, I don't know how much stiff upper lipping was going on as opposed to a nervousness about what might come and a resignation about more ranting about Islamic extremism in the media. This was the area where maverick politician George Galloway had capitalized on opposition to the war in Iraq to unseat Labor MP Oona King. This was the area where after 9/11, police had been posted outside the mosques.

"After the Twin Towers, some women had their hijab ripped off. We are hoping nothing like this will happen this time. But the community leaders always talk to the police when something like this happens," said Ansar Ahmed, an office bearer with the Shadhinata Trust, an organisation dedicated to preserving Bangla culture. He sits in the Gram Bangla sweetshop with his little daughter, let off from school early.

Ahmed wasn't too worried about the safety of his daughter. Ten years ago, he says, he would worry about going into a pub filled mostly with white people. Not far from here, Aftab Ali, a textile worker, was killed in a racist attack in 1978. Three people were killed and 110 injured in nail--bomb blasts in Soho, Brixton and Brick Lane in 1999, attacks that targeted gay pubs and Asian businesses.

Now Asians are everywhere, as newscasters, lawyers, and restaurant workers. Brick Lane in Tower Hamlets, the host borough for the 2012 Olympics, has the most Asian councillors in the country. Now with so many Asians, mostly Muslims, around, Ahmed doesn't see attitudes toward them changing radically, as they did in the United States after 9/11 where ignorance led to a spate of hate crimes like the killing of a Sikh gas station owner.

Though there has been an uptick in hate crimes in Britain since the attacks, people at Brick Lane don't seem too worried. "After all, we are the majority here now," said Zahid, a law student who has lived in the area since 2002 as he watches the police turning traffic around from the blocked Whitechapel street.

This is the area where Jack the Ripper once roamed. It has been home to progressive waves of immigrants from Huguenots to Jews to Bangladeshis. Now thanks to vigourous marketing one of the most deprived areas of London has become the curry destination of the city. Many of the restaurants lining Brick Lane have frosted glass fronts and glossy menus to entice tourists.

"When something like this happens business will drop, if nothing else because of transport problems," said the owner of Gram Bangla sweetshop gloomily.

But the most important need of the day is to keep the peace. In a letter addressed to the community, the Bangladesh Welfare Association announced a peace march through Brick Lane on Friday, July 15. "The terrorist attack has caused deep pain to our multicultural community, we therefore need to stand together and show our unity in tackling terrorism," writes Nurul Islam, secretary of the Bangladesh Welfare Association.

Whether that peace march succeeds in healing the wounds and allaying fears or not, my abiding memory of July 7 will be different. Outside the shuttered Aldgate tube station I saw a rather tattered poster getting wet in the drizzle. It advertises an exhibition and seminar organized by a Sufi school. "Non Violence: A Choice -- 4th to 10th July, Goldsmiths College," it read.